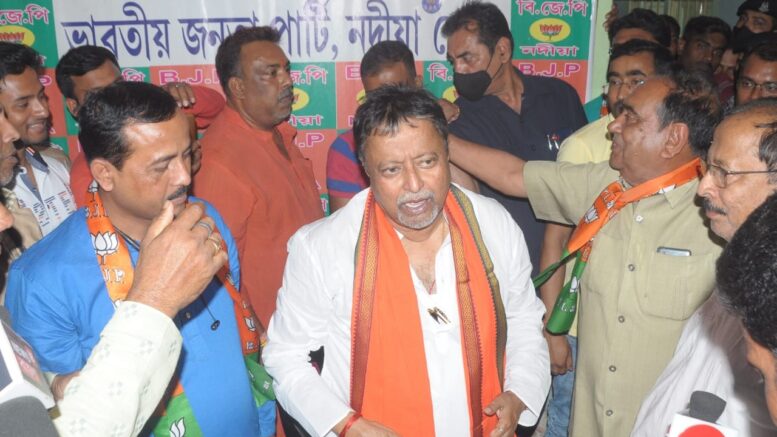 Krishnanagar, March 18: Senior BJP leader and party’s national vice president Mukul Roy said that seeking vote for self would surely be an ‘unusual’ experience being a poll aspirant this time. Roy, who has been nominated as the BJP candidate for the Krishnanagar Uttar (North) assembly constituency told the media persons in Krishnanagar town on Thursday night, a little before kicking off the pre-poll campaigning.

BJP’s central party leadership on Thursday afternoon announced his name as a nominee while releasing a list of candidates for the 148 constituencies in the state.

Roy, 66, a former Trinamul leader and union minister as well who is known for his organisational acumen, would be fighting an election for the second time in his life after 2001 – a gap of 20 years, when he lost to Forward block candidate at Jagaddal constituency. As a Trinamul candidate, he was defeated by 56741 votes and came second.

Roy rushed to Krishnanagar on Thursday evening barely within few hours of announcement of his candidature to plan strategy with the party workers. He held talked with the local leadership and party activists to kick off the campaigning. Elated over his nomination, the party workers felicitated him at the district party office vowing to win the poll battle for him.

“It is almost after a gap of 20 years I am on the doorstep of the people to beg for votes. This is definitely going to be an unusual experience as so far I worked to seek vote for others. I am hopeful to get the support from people of Krishnanagar”, Roy said in an optimistic tone. Both Roy and the BJP leadership are optimistic about his win this time considering the advantageous position of the party in the Krishnanagar Uttar assembly segment. In the 2019 Lok Sabha election, BJP was ahead of Trinamul Congress by about 5400 votes in the segment, which is a part of Krishnanagar Lok sabha seat that was, however, bagged by Trinamul candidate Mahua Moitra. In the ensuing assembly poll, Roy will be fighting against Trinamul’s star nominee Koushani Mukhopadhyay.

“I am confident of a victory…I do believe that people of Krishnanagar would give me a chance to work for them and the for an overall development of this great town”, he said.

Speaking about his previous experience of poll battle Roy said, ‘I lost in Jagaddal in 2001 because there was no atmosphere in the state then for a free and fair poll. There is no such fear this time. People would be able cast their votes freely without fear”.

Party insiders said that Roy was reluctant to fight the poll, but succumbed under pressure made by the top leadership of the party.

“I decided not to fight the poll again. But, I have to change mind eventually only to obey the direction of the top leadership of the party. There is no scope for any personal choice. I will obey the party’s directives as a sincere soldier”, he told the media persons.

In Nadia voting will be held on two phases with the first on April 17 and the second phase on April 22. The counting of votes will be held simultaneously for all the 294 assembly seats in the states on May 2.