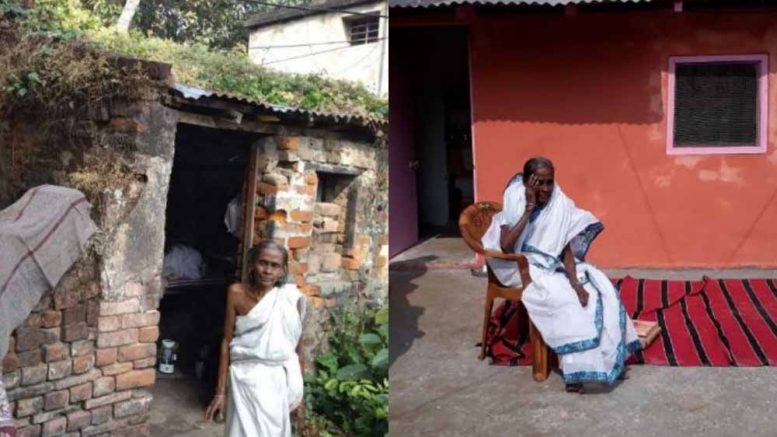 Jyotsna Sen in front of her home: the Old and the reconstructed

They handed over the key to Jyotsna Sen of KC Das road in Santipur and also arranged a “griha probesh”, to mark the entry to the “new” home as per her wish.

The old house has no toilet and water source.  But, while renovating it, the local residents have also built a toilet while a neighbour Hari Ghosh, a cloth trader, has come up to supply water to the house from his reservoir.

Responding to the appeal of the local the WBSEDCL has provided her electric connection. The neighbors will bear its expenses. For the elderly woman, the entry unfolds a new chapter in her life as she started living in her renovated home after struggling to survive in its dilapidated state since her husband, a eatery owner died 39 years ago.

“It might be a renovated one, but to me it is actually a new home.  It provided me a new lease of life today. I am grateful to all who made this possible and given me immense happiness in this fag end of life”, said octogenarian Jyotsna with tears in her eyes.

Members of “Marami”, a social organisation in Santipur made this possible who with the help of local residents garnered a fund of Rupees fifty thousand to repair and renovate the house of the elderly woman which was in a dangerous state and could collapse any moment.

Members of the organization who work ro create awareness for organ donation came to know about Jyotsna and her plight during a awareness drive in her area and decided to help her.

Secretary of “Marami”, Tapan Majumder, a retired assistant professor, said, “It was quite shocking to see her living in the dilapidated house. It was in a horrible state. The brick walls were heavily damaged and on the brink to collapse. The roof could cave in any moment. The house has no toilet and water source. The woman used her neighbor’s toilet. We talked to the woman and her neighbors. We learnt that she has no income and surviving solely on the help of others. So we decided to restore her house and to build a toilet for her. Some local residents also agreed to join”.

“We consulted with an engineer about renovation and made an estimate of Rupees fifty thousand approximately for the job, which we decided to raise from our members and from some local residents”, Majumder added.

The renovation work began in the last week of December and ended within a fortnight. During the renovation her neighbor Hari Ghosh provided her shelter.

The residents demolished damaged walls and constructed new brick wall. New floor was constructed. The top was covered with corrugated sheet and an attached toilet was also constructed. The entire unit was given new patches of color that provided a new look to the house.

Jyotsna said, “I became penniless when my husband died. I fell ill soon and became incapable to do any hard work that could help to earn a living. I have no children who could help me. It was my neighbors like Hari Ghosh and some relatives who helped me to survive with their generous gesture”.

“I am grateful to them who have been helping me with money, food and clothes else I would have

Jyotsna in front of renovated home

die. Some times they arranged rice for me which I cooked. They took my entire responsibility. Even during the renovation work Hari Ghosh provided me shelter and food. I am indebted to all these people”, she added

Majumder and Marami members were surprised when they found the woman was never enrolled for any welfare scheme except a ration card under food security scheme that provided her to get essential items like rice, sugar and kerosene.

“It is really amazing that the woman was never provided any benefits under government’s welfare schemes. She basically managed to survive solely on the benevolent gesture  of the local residents”, Professor Majumder added.

Jyotsna’s neighbor Hari Ghosh, who helps her a lot said, “I just done my duty as one does for his mother. However, i could not repair her house alone. It is great that other residents mobilised by Marami made her house a good one”.

On Tuesday when appraised about her plight local councillir Govinda Ghosh said, “I was not aware of her condition. I will try my best so that the woman gets benefits under government’s welfare schemes”.