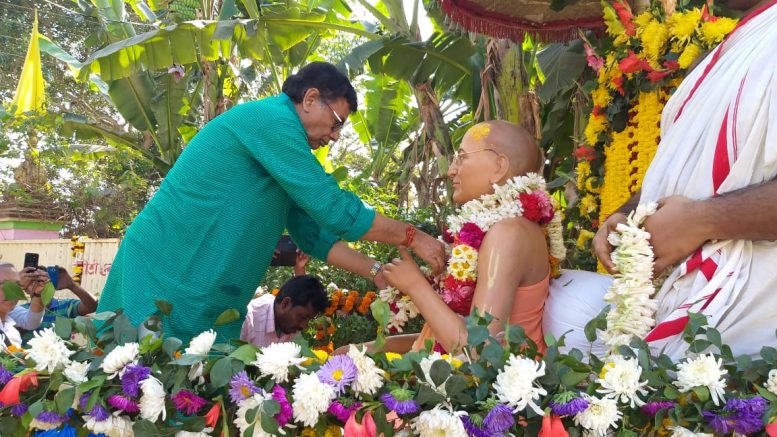 Mayapur, Feb. 24: A large number of devotees celebrated the 146th holy appearance day of Srila Bhakti Siddhanta Swaraswati Thakur Prabhupad with pomp and enthusiasm in Nadia’s Mayapur on Sunday. The day is otherwise celebrated as Sri Vyas Puja Mahotsava. Sri Saraswat Gaudiya Vaishnav Sangha, a body of all the major Gaudiya mutts in Nabadwip, Swarupganj and Mayapur town including Iskcon, organised the main celebration in Mayapur.

A grand colourful Rath decorated with flowers carrying the deity of Srila Bhakti Siddhanta Saraswati Thakur was taken out by the devotees from his Samadhi temple at Sri Chaitanya Mutt early in the afternoon.  The rath travelled up to Hulor Ghat and concluded at the ground of Prabhupad Ghat in Mayapur later in the evening, where the main celebration held. State minister for correction home services Ujjwal Biswas paid his tribute to this great teacher in the evening.

Srila Bhakti Siddhanta Saraswati Thakur was born in 1874 as Bimala Prasad Dutta in the house of Lord Sri Chaitanya MahaPrabhu. At an early age he read and mastered the Holy Scriptures and became an authority of Vedic literature and also an effective preacher. He established 64 Gaudiya Mutts across the country as well as abroad and had excavated all the places apart from constructing temples where Lord Sri Chaitanya MahaPrabhu had performed his leele.  His most worthy disciple, is AC Bhaktivedanta Srila Prabhupad, founder of Iskcon who following his instructions went abroad to preach the teachings of Bhagwad Gita and Srimad Bhagwatam