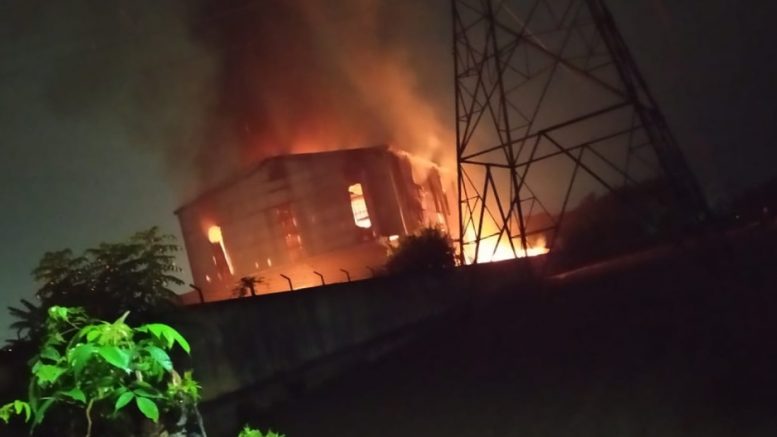 Fire engulfed the warehouse of PR Exports Limited in Kalyani during the early hours of Friday morning. Picture by Palash Sarkar

Kalyani, Sept. 16: Packaged spices meant for export and sorted raw items grossly worth about Rupees ten lakh were gutted in a massive fire that engulfed a warehouse in the Kalyani Industrial Area during the wee hours of Friday morning.

Four fire tenders from Kalyani, Kanchrapara, Chakdaha, and 32 personnel were pressed into action and brought the fire under control late in the morning after fighting for about 10 hours. No person was injured or died in the incident. But the devastating fire rendered its 50 employees and 600 women in the adjacent areas jobless before the festive season. These women were indirectly associated with the warehouse owned by PR Exports, where they were engaged in cleaning and sorting raw spices before sorting and packaging. Four fire tenders from Kalyani, Kanchrapara, and Chakdah with about 32 personnel fought hard for 10 hours since late past midnight to bring the fire under control on Friday morning.

Police and local sources said that a fire broke at the warehouse at about 1.30 am. Firefighters from Kalyani town arrived at the spot at about 1.45 am. But, more tenders were summoned to the spot as the fire spread fast due to the existence of highly inflammable dry spices and a huge amount of bay leaves, cumin, coriander, elaichi, asafoetida, and other dry natural cooking spices packed in sacks.

The reason behind the fire could not be ascertained immediately. However, firefighters apprehend that thrown away matchsticks or cigarette butts might have led to the fire. Fire Officer Biswajit De, “The reason has to find out….But the possibility of fire due to electrical fault appeared less to us. We needed to investigate properly”. The fire officials have meanwhile accused the warehouse company of having no fire safety measures inside despite handling highly inflammable items. (Picture credit: Palash Sarkar)