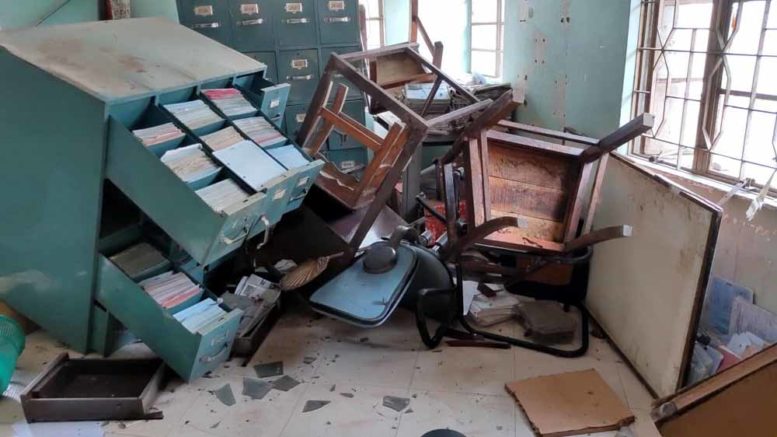 Krishnagar, May 24: Angry villagers vandalized a customer care office of West Bengal State Electricity Distribution Company Limited (WBSEDCL) in Nadia’s Dignagar on Sunday morning after a farm labor was electrocuted being entangled to a live wire while working on a field.

Villagers alleged that despite repeated appeal the WBSEDCL authorities did not bother to disconnect the power supply in the snapped cable even after four days Cyclone Amphan had wreaked havoc. The WBSEDCL authorities, however, held a section of the villagers responsible for the death as they had allegedly made a local transformer functional which was shut down after Cyclone Amphan caused damage.

Kazir Mandal, 42, a resident of Bagdia village in Santipur, who went to Dignagar-Jeolgari village near Krishnagar, was unaware of the live cable of high tension line that was hanging from an overhead post being snapped off due to the gusting speed of the cyclone.

A farmer said, “Kazir came in touch to the live cable while ploughing a land. He could not see the live cable carrying 11000 volts lying on the ground. He practically died on the spot only due to the sheer negligence if the WBSEDCL authorities”. Some farmers later rescued him and took to a local hospital, where he was declared dead.

The death sparked anger among the villagers in the Dignagar area as over one hundred of them went on a rampage attacking the WBSEDCL’s customer care office. A police team from Krishnagar rushed to the spot to control the situation.

Refuting the allegations of negligence, a senior officer of WBSEDCL’s Ranaghat Division, said, “The supply was disconnected we came to know that cable snapped in different locations. A feeding transformer was shut down, but some farmers made it operational keeping us in dark which apparently led to the accident”.