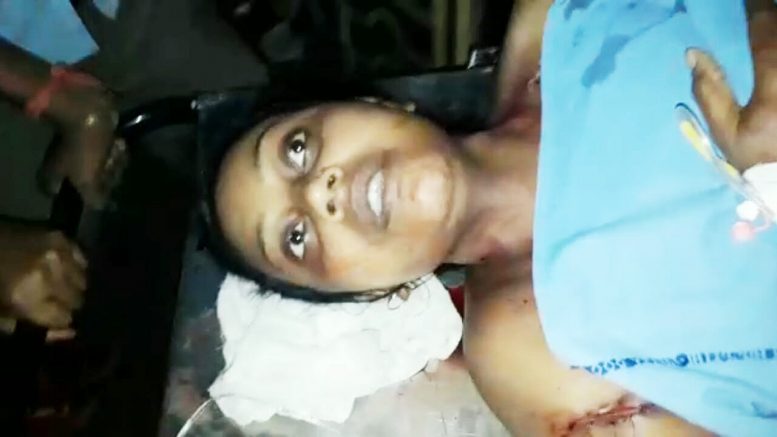 Anima being taken to operation theatre at JNM Hospital in Kalyani

Kalyani, Aug. 8: A young nurse was critically injured when a youth allegedly stabbed her indiscriminately for at least 18 times inside a compartment of a Sealdah bound local train on Thursday evening at Kalyani station when she protested against his traveling in the ladies compartment.

The incident that once again shown the abysmal situation of passengers’ safety inside running train, had occurred at about 7.30 pm when the Sealdah bound train was gradually leaving the Kalyani branch platform. Police have started a probe. But, till late night the lone attacker could not be arrested.

The victim woman identified as Anima Sahu (32), a resident of Bhutbagan area in Kanchrapara town was rushed to JNM Hospital in Kalyani town. Doctors said that her condition is critical as the assailant had stabbed her at least 18 times in several parts of her body. “Several parts of her body and organs were damaged”, a doctor said.

Anima, who worked as nursing staff at a private hospital in Kalyani town, had boarded the unguarded ladies compartment of the train at Kalyani station on her way back home after day’s work.

Eyewitnesses claimed that when the Sealdah bound Kalyani Simanta local was gradually leaving the branch platform, some railway hawkers noticed that panicked women jumping off the ladies compartment and some women crying for help. They immediately had drawn the attention of the guard, who stopped the train when some hawkers rushed inside the compartment and witnessed that a youth stabbing a woman while she was trying to resist helplessly.

Once the hawkers entered the coach, the assailant escaped jumping through the compartment’s offside gate. The hawkers then brought a heavily bleeding woman outside of the compartment and rushed her to JNM Hospital.

Victim Anima said that the youth had attacked her with a knife after she asked him to leave the compartment.

Another woman who was traveling in the compartment said, “An altercation had begun between the victim and the youth when he boarded the ladies compartment in Kalyani. She protested his traveling inside the coach and asked him to shift to the general compartment. But, the man started stabbing her suddenly. It occurred so quickly that we felt panicked and helpless…There was no RPF inside the compartment despite it was night. So of late, we cried out for help when the train stopped”

Senior RPF and GRP officers rushed to the hospital and monitoring the condition of the woman. The GRP has already started an investigation into the incident.

An investigating officer said, “We need to talk to the woman in detail once she recuperates. We are trying to identify the assailant and to nab him as well. It could not immediately be ascertained if only a quarrel over boarding the ladies compartment led the attack. We are not ruling out any old enmity with the victim woman”.