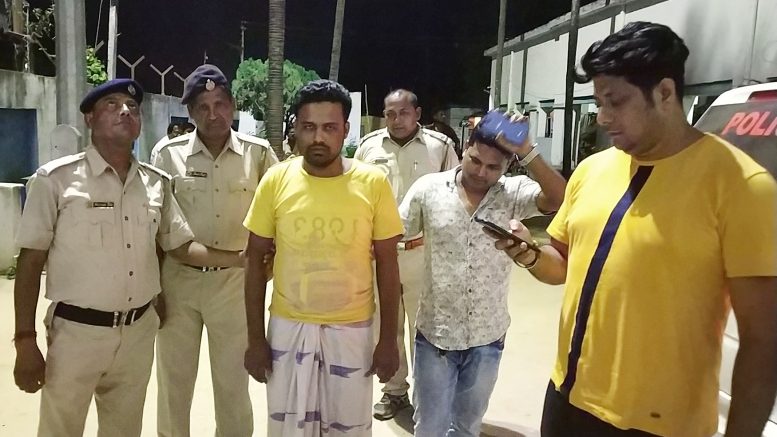 Rabiul Islam being taken to court

Nakashipara, May 12: Police have arrested a 32-year-old man from North 24Pargana’s Maslandpur on Saturday night allegedly for duping a lady teacher of Rupees 1.2 lakh by creating a fake Facebook profile in the name of an officer in charge of a Nadia based police station.

Police said, Rabiul Islam, who created a fake Facebook profile posing as Raja Sarkar, a sub inspector, at present in charge of Nakashipara police station, and cheated several persons mostly women which include a number of lady constables, was arrested from his home on the basis of a complaint lodged by a lady teacher based in Duttapukur.

The lady teacher attached to a school in Ashokenagar, in her complaint has alleged that Rabiul posing as OC-Nakashipara ‘Raja Sarkar’ developed a friendship with her and took Rupees 1.20 as loan a few months ago for treatment of his sister who suffered an acid attack by miscreants.

The lady teacher who refused to be identified said, “A few months ago I responded to a friendship request from one Raja Sarkar in Facebook, who Rabiul p   osing as a cop

claimed to be officer in charge of Nakashipara police. He posted a profile picture in police uniform. The logo of the West Bengal police was also used as a profile cover. He used to chat with me. One day he sought financial assistance claiming that her sister was suffered an acid attack and he needs money for her treatment. As per his request I deposited Rupees 1.20 lakh to his bank account….but off late I realized that I was cheated as he apparently refuted to return the amount”.

Nakashipara police on receiving the complaint began investigation and tracked the phone number through which Rabiul was operation his Facebook account and used to make calls to her targets.

The sleuths found that Rabiul used own photograph to pose as a cop wearing khaki uniform, but used profile name as ‘Raja Sarkar’. To make the profile credible he also used logo of the West Bengal police. Local sources in Maslandpur said, Rabiul is married and used to work as a hawker.

Raja Sarkar, officer in charge of Nakashipara police said, “It appears to be very embarrassing when I came to know that someone impersonating me to dupe innocent women. Apart from the lady teacher some other victim also made contact with me for same reason”.

Preliminary investigations revealed that Rabiul used to make friendship mostly with women posing as “eligible bachelor cop” in charge of a police station and cheated them for money after developing proximity.

An investigating officer said, “During interrogation he has revealed to during about Rupees 2.60 from several persons”.

Rabiul was charged for cheating by personation and for dishonestly inducing delivery of property. He was produced before a court in Krishnagar on Sunday which ordered five days police custody.

“We need to interrogate the accused as the women are his soft targets. We also came to know that the victims include a number of lady constables. He also made several marriage proposals with many of them. So we need to check whether he has made physical advances towards them”, an investigating officer said.