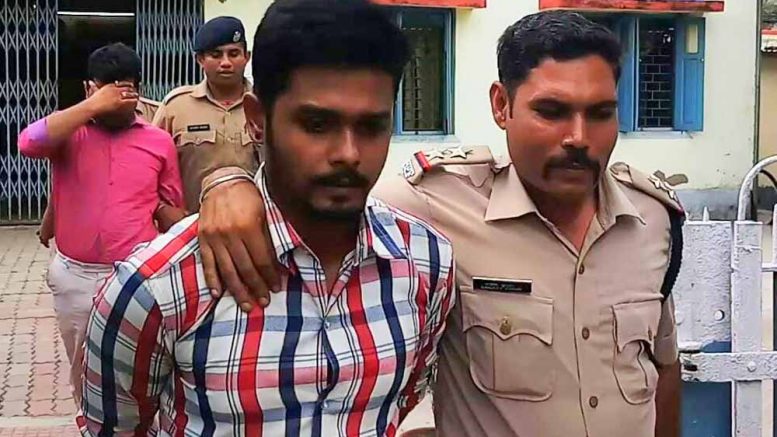 Ranaghat, Sept. 1: The intelligence wing of Railway Protection Force has arrested two officials of two separate travel agencies in Ranaghat on Saturday morning following a raid at their offices as they were allegedly black marketing e-tickets of long distance trains after purchasing them by using personal IDs generated thorough Indian Railway Catering and Tourism Corporation’s (IRCTC) portal. The RPF officials have alleged that the two agencies used to purchase huge number of tickets including tatkal tickets using personal ids and sell them in high prices creating tremendous problem for general ticket seekers.

A team of RPF’s Crime Intelligence Branch based on two specific complaints lodged by the IRCTC authorities began simultaneous raids at the office of “Piu Travels” and “Travel Express” both located on Swami Vivekananda Sarani on Saturday afternoon with support of Ranaghat police and arrested two officials, identified as Arpan Biswas and Sourav Das respectively and recovered 34 valid e-tickets from their custody apart from a gross cash amount of Rs.97275.

The two accused persons were charged for ‘illegal selling of train tickets’ under section 143 of Railways and produced before a special court on Saturday in Ranaghat which ordered four days jail custody for them. However, the owners of the two agencies went absconding.

Investigating officials alleged that none of the agencies have commercial registration of IRCTC as ticket booking agents. Nevertheless, they were using their personal IDs for commercial gains.

Ashim Das, an inspector with RPF in Ranaghat said, “These agencies have no valid authorities as ticket selling agents.

They used to purchase ticket using personal id and selling those tickets at high prices exploiting people. They were also creating serious problems for general ticket seekers. People often do not get tickets even standing in queue for long times. So on specific complaint the CIB with support of Ranaghat police conducted raids at the office of two travel agencies and arrested two of their officials”

During the raid that continued till late in the night, the CIB team recovered 8 valid e-tickets from office of the Piu Travels along with a cash amount of Rs.31955. On the other hand, the investigating officials recovered 26 valid e-tickets from the office of Travel Express and a cash amount of Rs.65320. Police have sealed both the travel agencies offices