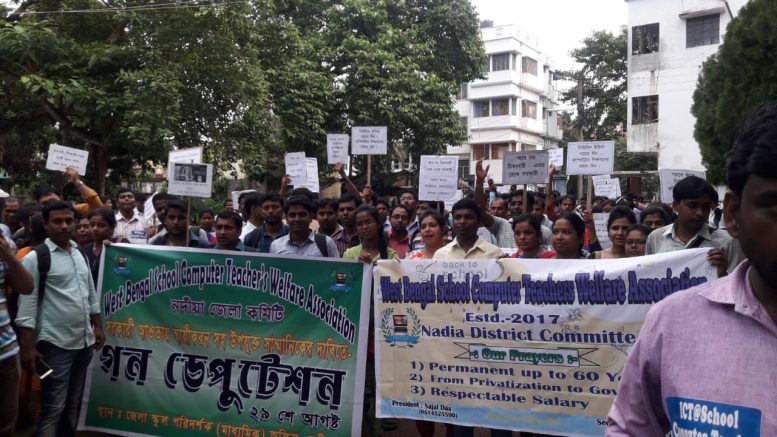 Krishnanagar, Aug. 29: Computer instructors working at state government aided secondary schools in Nadia under the centre’s project “Information and Communication Technology (ICT) in schools” submitted deputation before the District Inspector of School (secondary) on Wednesday demanding regularization of their job similar with the status of school teachers and enhancement of their monthly salary, a minimum suitable one including facilities like provident fund and others . Over five hundred teachers walked in a rally from Town hall ground and submitted the deputation later before District Inspector of Schools (Secondary) Anindya Chatterjee at his office under the banner West Bengal School Computer Teachers’ Welfare Association. The computer instructors under ICT project which is subsumed in the Rashtriya Madhyamik Shiksha Abhiyan  are appointed to schools on five year’s agreement by centre appointed project implementing agency against a fund provided by centre. But, the computer instructors alleged that the agencies pay them a paltry salary which is as low as Rs.4500 only. President of WBSCTWA’s Nadia unit Sajal Das said, “The situation has became unbearable as the project implementing agencies unleashed oppression. We work tirelessly like a regular teacher, being responsible of making students IT aware, but paid very poor amount. Finding no way we have appealed the state government to take us under its control as regular teacher, else we would die due to starvation”.