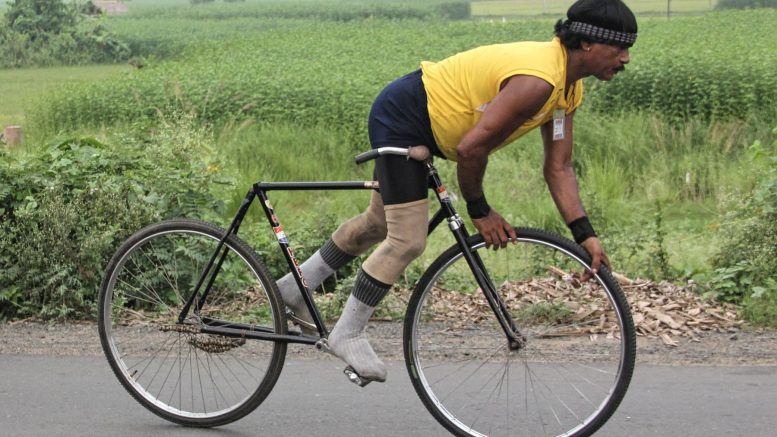 Krishnanagar, June 26: Prime Minister Narendra Modi would be happy enough if he could see that a 45 year old medicine shop owner from Bengal’s Sabang has taken up a toiling mission to create awareness about his “Swachh Bharat” programme through an unusual cycle ride across the country.

Debendra Nath Bera of Sarta Satsahi village of Sabang in West Midnapur district has began a journey of about 22000-km across the country from Debra in last week with an aim to visit all state capitals to spread awareness about the importance of cleanliness and sanitation on a bicycle that has no chain, no brake, no bell, no seat and no free gear at all. Bera has removed these parts from his bicycle. In a laborious endeavor, this medicine shop owner, has been moving ahead pulling the front wheel by his two hands leaning over the handle.
The effort is unusual and tough to sustain for the planned journey riding such a special bicycle. Nevertheless, Bera appeared to be firm in his endeavor and planned to complete the journey by next ten months.
Bera would try to meet Prime Minister Narendra Modi to appraise him about his endeavor when he would visit New Delhi around October this year. “Swachh Bharat Mission is Modiji’s dream project which I am trying to make people aware”, Bera said.
On Sunday he accompanied with his nephew Akash, arrived in Nadia’s Chakdah riding about 200km.
Akash, 28, has been following Bera on a normal bicycle carrying the baggages.
Bera’s objective to draw attention of the people through his unusual ride. “If I invite people at a spot and give them sermon on cleanliness and sanitation, they will not listen. My plan is to make people curious about me watching my unusual cycling so that I could create awareness using that opportunity. During my interaction with people I told them that I took this hard ride only for their awareness”, Bera said.
In this way Bera so far talked to people on at least fifty places to speak about “Swach Bharat mission” being stopped by curious onlookers.
On Sunday, he talked to people in Chakdah’s Panchpota village when some villagers stopped him while riding through NH34. Members of Relief and Rescue Unit of India, a social organization in Chakdah helped them to organise interactions with the people on the issue and also felicitated Bera and his nephew Akash Kumar Karan.
Son of a late state land reform department employee, Bera, who is unmarried, claimed to be very sensitive about cleanliness. “The bad habit of a large section of people hurt me. Many people keep their homes clean, but never bother to throw dirt on streets. At the same time, people in village are still avoid toilet just due to their prejudice. So when government took initiative on this issue, I too decided to do something using my special skill”, Bera said.
So for Bera, who passed Madhyamik decided to use his special cycling skill which he learnt during his teenage. “I had an ambition to achieve special skill of doing unusual things. So I learnt this special cycling and some balance skill to entertain people”.
To materialise his dream, Bera has used his personal savings of about Rupees 3.5lakh.
Raja Saha, of RRUI said, “This is an unbelievable endeavor. I have never seen anybody to work with such determination for a social cause which has no personal interest. Bera is a great exception”
Share the news