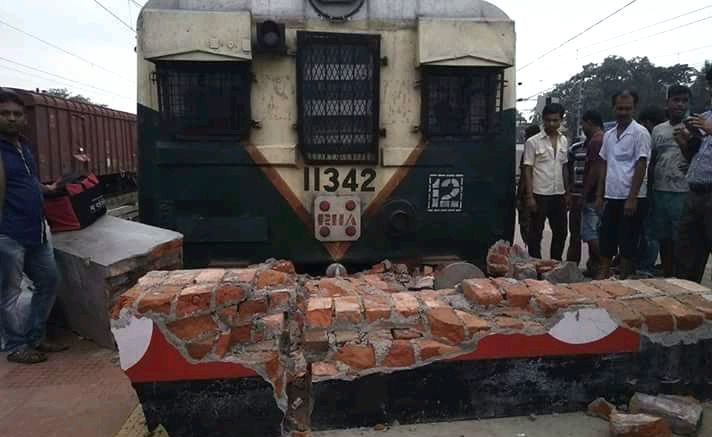 Bangaon local after it rammed into the guard wall

Ranaghat, June 24: At least six passengers were injured when a Ranaghat bound Bongaon local hit the guard wall at the terminal platform in Ranaghat  as a mentally unstable person took a forced entry inside the motorman’s cabin distracting his attention and tried to push him out on Sunday morning.

The incident occurred at about 7.05am when 33714 Bongaon local was entering the platform slowly. As the mentally unstable man entered his cabin, motorman Prasad Kumar Ghosh lost control over the train, breached the stop mark and rammed into the guarding wall and demolished on the platform number four.

The impact was so strong that the first two compartments crashed into each other damaging the seats of the first one particularly. The injured passenger were released after they were given first aid by railways authorities.

The train had earlier left Bongaon at 6.20am with a schedule arrival in Ranaghat at 7.05am.

The waiting passengers at the station who watched the man entering the motorman’s cabin, rescued  motorman Prasad Kumar Ghosh and handed him over to the GRP officials.

Police have arrested Mohammed Harun Mandal, a resident of Phanspur village in Murshidabad’s Rezinagar, who was scheduled to board a Sealdah bound train with her mother in law to see his ailing wife admitted at the SSKM hospital in Calcutta.

According to the eye witnesses trouble broke out when the train was barely 50-meter away from stop mark as Mohammed Harun grabbed door pull handle of motorman’s cabin and try to enter inside. Sanjoy Ghosh, a resident of Phulia, who was at the station to catch the train said, “The man boarded the running train and knocking the door with a shoe. He eventually managed to open the door and entered inside when the motorman was trying to resist him. But the man pushing him repeatedly that followed a scuffle which eventually distracted driver’s attention leading him to lose control of the train which ultimately hit the guarding wall with a crushing sound. Some passengers who witnessed the incident dragged out him from the cabin and handed over to police”.

Motorman Ghosh echoed the same. “The door of my cabin was closed. But the man opened it from entering his hand inside. He then pushed distracting my attention leading me to lose control”.

A spokesperson of Eastern Railways said, “Different versions of the incident have surfaced up. A five member committee will conduct a probe to find out what actually led the incident”.

ER authorities meanwhile grounded the motorman. “He will not be allow to work until the probe is completed”, the spokesperson said.

Senior GRP official after preliminary investigation said, “A mentally unstable man had tried to enter the motorman’s cabin. He boarded the running train, keeping his feet on the exposed entrance be had repeatedly knocked the Cabin’s door with a shoe, but failed to open it. Te motorman apparently felt panicked watching the man in an aggressive mood and distracted”.

The GRP officials and members of the ER’s probing team questioned Harun for several hours, but did not arrest him.

A GRP officer said, “We interrogated him for long. But, his replies are inconsistent. He is behaving aggressively. We talked to his family members who said that the man has history of mental instability and was under treatment”.

Family sources said, Harun earlier disembarked in Ranaghat from a Lalgola-Ranaghat local with his mother in law to catch a sealdah bound train. But he wrongly went to platform 4.

A passenger who seen him on the platform said, “He was shouting irrelevantly. Thrown out one of his shoes and his movie phone on track and then went for the approaching train”.