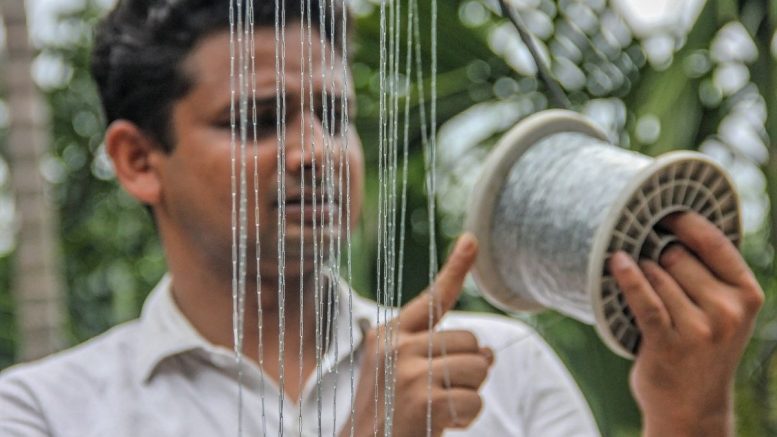 Anupam Sarkar with his staple chain Staple chain made by Anupam Sarkar

Santipur, June 27: 32-year-old Anupam Sarkar of Nadia’s Santipur had a long cherished dream to make an entry to the Guinness Book of World Records through the ‘cheapest’ possible way. The search prompted him to take up an endeavour to make the longest handmade ‘staple chain’ in the world. The professional television anchor who also works as a dubbing artiste for cartoon films is well set to materialise his dream as he has already hand-weaved a 518-meter chain (1700-ft) surpassing the current Guinness record done by Mackenzie Martin of United States.

Son of a weaver Anupam, who resides in Babla-Govindapur village of Santipur has made an appeal to the Guinness Book authorities to allow him to show his talent. Accepting the appeal, the Guinness authorities in April have asked him to display his creation by July 1.

For the past three months Anupam has been working tirelessly for over 14-hours a day to achieve his target of making a 550 meter (1804 ft) long ‘staple chain’ by July 1 as per his claim when he would display his creation in front of administrative officials and people in Santipur town.

Interestingly, in his endeavour to make the record Anupam has incurred just Rupees 455 that includes cost of about 70000 pieces of staple pins (Rs.423), a stapler (Rs.27) and a plastic made small cable drum roller (Rs.5).

Anupam said, “My main objective was to make an impression beyond my profession. But, cost was an issue to me. I decided to something special in a quire affordable price. So I started searching something which could be compatible to my plan. My search ended when I heard about Khandaker Shihab Ahmed of Bangladesh who in 2007 had first got a gunnies entry by making a 182.73 meter long staple chain by spending just about Rupees Two hundred. I started working on a similar endeavour and eventually came to know that Mackenzie Martin of United States broke his record in 2016”.

“The Guinness authority sent me some guidelines. I procured materials and started making the staple chain as per their instructions from the first “This is an enduring job which I have been doing tirelessly day and night for the past two months. I punch the staples lightly; link the ones with the other one by one using finger pressure to tighten the loop and roll it to drum roller”, Anupam adds.

The endeavour is a rigorous one, but Anupam has been doing it single-handedly. “It is my job so I have to complete it. I am, however, thankful to my wife Amrita who has been by side with her passionate inspiration”.

But, what would be the utility of this unusual staple chain? Anupam said, “Records are made to be broken. I will take up fresh endeavour to break own record. But, I will make a smaller one to gift it to President of India once I achieved the goal”.