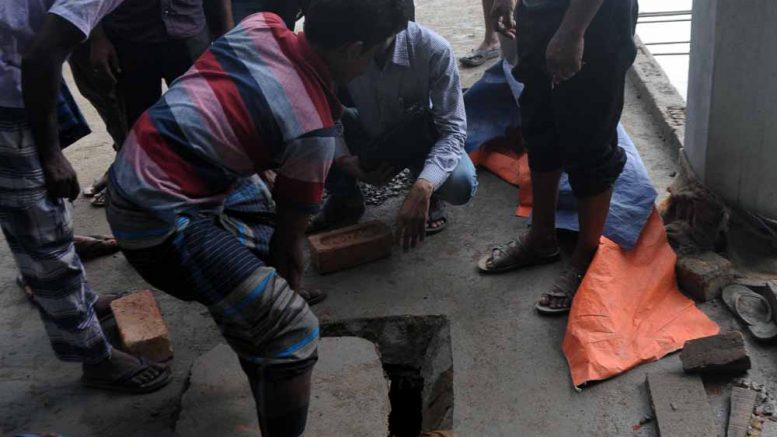 The villagers gathered around the manhole of the septic tank in Chapra, Picture by Pranab Debnath

The bizarre incident occurred at the house of one Ranjit Singh Yadav, a milk supplier, at about 10am when the three workers climbed down into the 15-ft deep septic tank through a manhole of the covered top to remove the wooden support over which the reinforced cement concrete top was casted.

The bodies of the three victims were recovered by the police with the help of locals by demolishing a part of the side wall of the tank later. All the three were rushed to Chapra hospital where they were declared brought dead.

The victims were identified as Abdul Hakim Mondal (55), Baqbul Mondal (28) and Farooq Mondal (27). All the victims were residents of Pitambarpur, 10km away from the accident spot.

House owner Yadav said: “The masons casted the top cover three weeks ago and today they came to remove the centering from inside the tank. They went inside through narrow space of the covered top”.

District police superintendent Sheesh Ram Jhajharia said: “It appears that the three laborers died of suffocation either due to formation poisonous gas or lack of oxygen inside the newly constructed tank. We have sent the bodies for post mortem to find out the exact reason for death”.

Local sources said that today morning it was Abdul Hakim Mondal first climbed down inside the tank. Observing that he was not responding since long, Farooq climbed down for help. A local villager said: “Soon after climbing down inside Farooq started screaming for help, but became silent within few minutes. Apprehending him in trouble Baqbul went inside and died within minutes”