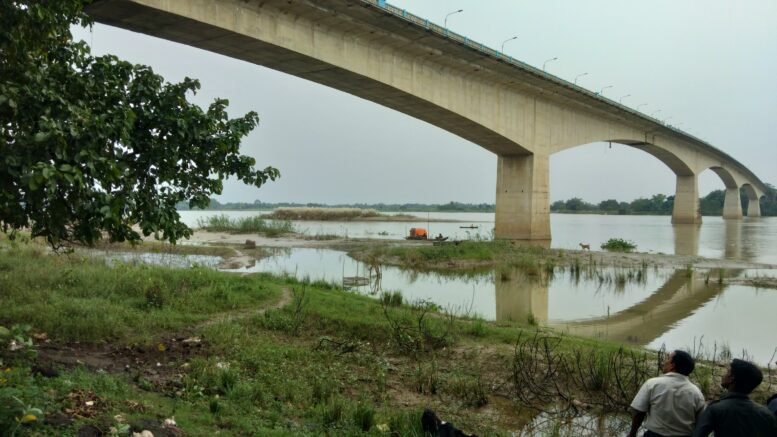 Krishnanagar, Oct. 20: Traffic communication between Nadia and East Burdwan district has been seriously suffered since Wednesday morning following the state Public Works Department has suspended movement of heavy vehicles on the Gouranga Setu over Bhagirathi river following the expansion joints of the suspended spans of this cantilever bridge were dislocated.

The PWD authorities have barricaded the lane under which the joints are dislocated while keeping the other lane open to allow movement of only light vehicles (maximum 8 MT gross weight) to avert any further damage to the bridge.

A team of PWD engineers of Nadia HighWay Division-II led by Executive Engineer Sanjay Singh examined the bridge and stated that the movement of heavy vehicles will remain suspended until the repair works are completed, which would commence from Friday after a fresh visit of bridge experts on Thursday.

Speaking to The NfN Executive Engineer Sanjay Singh said, “The expansion joints of the 6 meter wide suspended spans of the cantilever bridge have been dislocated by over an inch to an uneven level. We have examined the joints from different angles including the bottom. The good sign is that so far no crack has been noticed. so we have barricaded one lane to which the joints are parts to avert any further damage”.

“We have done preliminary investigations today. There will be a fresh investigation by our expert team on Thursday and we have planned to begin the restoration works from Friday with a target to complete the work within a week”, the Executive Engineer said.

The 569-meter long cantilever bridge connects Krishnanagar with Nabadweep, which is adjacent to the Purbasthali block of East Burdwan district. A large number of vehicles and inter-district public transport connecting Nadia, East Burdwan and Birbhum run over the Gouranga Setu.

This bridge spanned over six piers in all. One approach pier at both ends is located on the river embankment while the other four piers are based on the river bed.

In 2016, two of the main piers of the bridge were dislocated due to erosion of river embankment and repeated inundation during monsoon. However, the snag was repaired but the condition of the bridge’s health remained feeble due to repeated weakness in its bearing.

Executive Engineer Sanjay Singh said, “We were undergoing periodic maintenance works. However, the work was disrupted due to heavy rain and rise in the water level in the river Bhagirathi”.

“We are examining all aspects and if required the bearings will also be replaced in this phase of maintenance schedule”, Singh added further.

Local residents and motorists, however, alleged that unless the erosion of the soil at the base of piers are not arrested, the bridge may collapse in near future.

“Erosion of the soil at the foundation occurred due to repeated inundation of the river embankment where the foundation of approaching piers are located. Being local residents we closely watch its condition regularly. The erosion has created a panic of sorts among us. Apart from repairing the present snag, the prime objective of the engineers should be to arrest the soil to prevent erosion and then to reconstruct the concrete base of the piers”, a Ratan Sarkar, a local resident and a driver by profession said.

Local residents also demanded construction of a new bridge as an alternative to the Gouranga Setu as an immediate requirement. “Gouranga setu is around 50 years old…there has been a huge pressure on this two lane bridge. The state government should consider building a new bridge as it has been doing for Iswar Gupta Setu over river Hooghly that connects Nadia (Kalyani) to Hooghly (Tribeni)”, a local resident said. Executive Engineer Sanjay Singh, however, said, “We have so far no such proposal for a new bridge”.