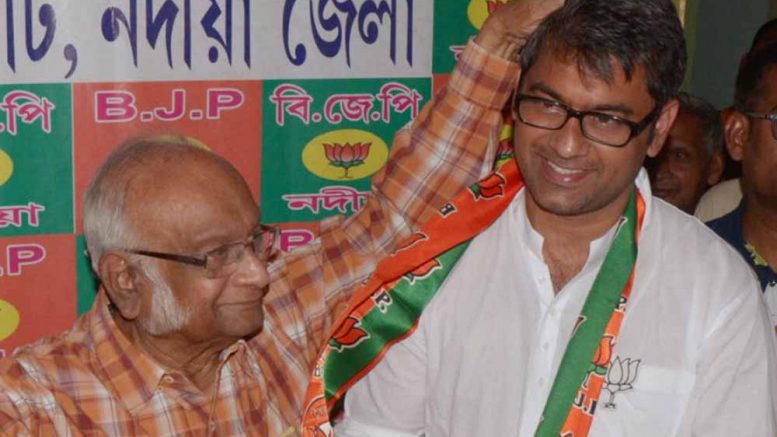 Krishnanagar, March 27: Unlike some of his senior colleagues in the party elderly BJP leader and former union minister Satyabrata Mookherjee (Julu) on Wednesday said that age is a bar before good governance and a good leader should make way to welcome young leadership. Keeping aside all speculations about his “unhappiness”, Mookherjee urged the party workers to accept party’s new generation candidate footballer Kalyan Chaubey (42), who has replaced him to fight in Krishnagar, to ensure his victory.

Mookherjee, now 87, was apparently denied nomination as the top BJP leadership decided to ease out several of its old guards from the poll battle by introducing an age bar of 75 years.

Mookherjee thinks this would not affect party’s poll prospect and rather seniors should make way to welcome ‘new generation”. He told party workers, “I am always in favor of new. I know I cannot stay forever. I also know that new generation would come to replace old and show new avenues for future goals. This should be accepted by all”.

Categorically urging his followers apparently annoyed over his rejection by the party, Julu Babu, reminded them not to take things as “granted” and told them to remain united forgetting their prejudices and ensure victory for Kalyan Chaubey. Julu Babu walks in a rally with Kalyan Chaubey

Keeping aside all speculations about his ‘unhappiness’, Julu Babu in an attempt to encourage his followers to join campaigning for Chaubey, had walked in a rally in Krishnagar town. Later in the afternoon he also attended a party workshop with Chaubey in Betai. The party later announced him as the chairman of the Krishnagar constituency’s election steering committee.

Satyabrata Mookherjee, a renowned barrister and a resident of Kaliganj, used to be a popular choice for BJP during the last five Lok Sabha poll since 1998 to fight from Krishnanagar. He, however, won only in 1999 and became a minister of state in Atal Behari Vajpayee’s led government. In 2014, despite strong Modi wave, he became third securing only about 16% votes. Nevertheless, this time his close aides his re-nomination from Krishnagar. But, his age became the hindrance before his re-nomination. This, however, angered his followers who also expressed their reservations to work for party candidate Kalyan Chaubey, a close confidante of RSS.

Party insiders said that some senior leaders in Nadia south zone were instigating workers to demand for local candidate. “But, top leadership has conveyed a stern message that any attempt to damage poll prospect will be dealt with strongly”, a senior leader working as a think-tank member of Krishnagar seat said.

Annoyance of a section of party workers over nomination of Kalyan Chaubey had also embarrassed Satyabrata Mookherjee.

Party insiders claimed that Wednesday’s first initiative of joint campaign, was actually a damage control. In a bid to show a united face of the party workers, the leadership also organized a media conference.

Mookherjee told party workers, “There is nothing granted forever. I cannot stay here forever. I am happy with Kalyan’s nomination”.

“Nevertheless, some people are trying to create an impression that I am unhappy over Kalyan’s nomination. This is not true”, he added.

Party candidate Kalyan Chaubey said, “BJP is not one man party. Nevertheless, some leaders mark their presence among people’s mind. Julu Babu is such a person. I am grateful that he has come up to extend support. It appears I am witnessing a transition and taking the baton from Julubabu”.