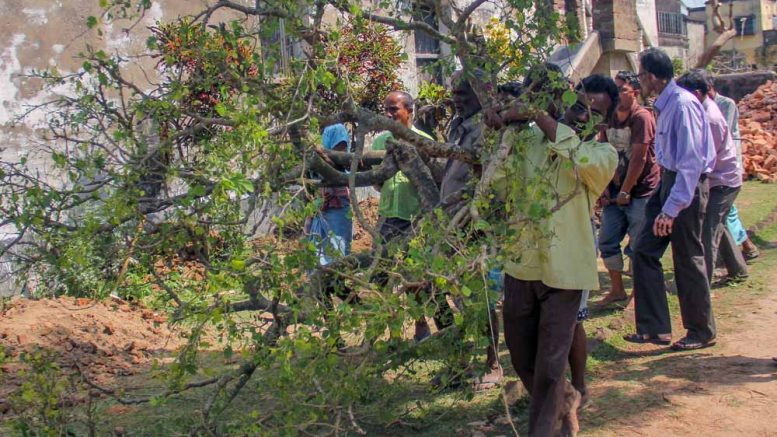 A neem tree being taken for transplantation

With the approval of the state forest department, the members of the library under the technical guidance of Nature Mates Nature Club, Jadavpur NGO, transplanted a 30 years old Neem tree on Monday. The giant tree was removed from earth and relocated to another place inside the library premise later.

The library during the next few days would in similar way transplant three other trees (Manikanchan, Deodaar, Palash) without harming them at all. Santipur Sahitya Parishad was established in 1915 by renowned educationist Pandit Laxmikanta Moitra and others. The library has huge collections of books apart from over one thousand original manuscripts and favorite place for researchers. In last year the trustee who run the library decided to reconstruct the building with an aid of Rupees 7.75 lakh granted by Raja Rammohun Roy Library Foundation, a wing of Ministry of Culture, Government of India.

Susanta Kumar Mutt, secretary of Parishad said, “When we decided to reconstruct the library building expanding its area to include new rooms, these big trees became our concern. For about past three decades these trees are with us. We heard that trees can be relocated. So we talked to some of our readers who are members of Paribesh Bhabna Mancha. They helped us to contact Nature Mates Nature Club”.

Sanjit Kastha, a member of Paribesh Bhabna Manch said, “We were moved by the decision of the library when they sought our help. So we extended our support in all possible ways”.

On Monday about 40 persons which include laborers and members of the library dug earth deep around the neem tree and manually removed it including its roots and transplanted it to a pre-dug 6ft deep place in it.

“We guided the labourers to take maximum care of the roots so that they are not harmed. Nevertheless, a few roots were damaged which were administered with medicine for quick healing”, said Debarpan Dutta, a 1st year post graduate student of Environmental studies at Rabindra Bharati University and a member of Nature Mates Nature Club.

“We have earlier transplanted many such trees in Milan Mela, Alipur and other places as per direction of the state forest department. So when the library members contacted us we agreed to help them”, Debarpan said.

“For such transplantation examining the land health, health condition of the tree is very important apart from motive behind it. We checked all these factors and then agreed to help”, he added further.

Sanjit Kastha of Paribesh Bhabna Manch said, “The concept of transplantation is a primitive one. Ancient Egyptian pictographs show men transporting trees with roots in large containers. Egyptians transported trees even in ships to transplant them in other places. This concept is now being used with modern technology. If government adopted this technique, many trees could be saved while taking up expansion work of Jessore road and Chakdah-Bangaon expressway”.