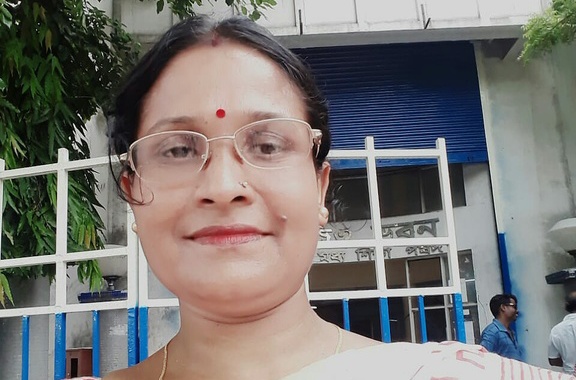 Krishnanagar, June 25: A Krishnanagar based high school authorities have prevented an ailing lady teacher to join the school despite the state education department on medical ground issued her posting order transferring her from a Nalhati based school since she has been suffering from kidney and gynaecological problems.

Responding to her appeal the West Bengal Board of Secondary Education transferred Kabita Biswas (43), a work education teacher to Krishnagar High School in her hometown Krishnagar on June 12 on the basis of initial recommendation and approval by the West Bengal Central School Service Commission issued on June 3.

She was subsequently released by Prasadpur Ramranjan High School of Nalhati on June 22. But, even after expiry of three day’s joining time on Tuesday, Kabita could not join Krishnagar high school as the school authority refused to allow her to join since a teacher was earlier ‘recommended’ for posting there by SSC.

On Tuesday, the ailing lady teacher ran from pillar to post in fear of ‘discontinuation’ of service as she could not join duty within stipulated time period.

She eventually appealed the DI once again to accept her joining and also informed the District Magistrate, Nadia and President of WBSE as well as SSC about her plight.

Surprisingly the District Inspector of schools (secondary), Nadia did not allow her to join the school when she sought her help only because a teacher was earlier recommended for posting there by SSC.

“It is horrible situation as both the school and the DI flouting Board’s and SSC’s order and harassing me. There may be a previous recommendation, but no posting order was issued for that teacher. Rather the SSC and board have recommended me and also issued posting order, which I argued and tried to convince them. But, they did not allow me and harassing me for the last three days”, Kabita Biswas said.

“I went to Krishnanagar High school to join, but the head master said without DI’s written order joining is not permissible. I went to DI who did not cooperate me and deliberately avoided me keeping me waiting throughout the day. There has been repetition of same behaviour during my in subsequent days..”, she added.

Kabita had joined Prasadpur Ramranjan High School in Krishnapur of Nalhati during August 2010 as a SSC recruit. But later she developed gynaecological and kidney problem and had to undergo five surgeries. Her appeal for transfer to her hometown Krishnagar on medical ground was considered by the state education department and she was posted to Krishnanagar high school against existing vacancy. But, the school authority did not allow her to join.

A senior teacher of the school said, “In January on the basis of our need, he SSC recommended posting of a fresh recruit. We are waiting for his posting order. So how can we accept another teacher for the same post”.

An officer at education department said, generally prior to posting order the SSC send names of teacher recommending posting. “But, unless the posting order is issued such recommendation has validity. Moreover, here the SSC being recommending authority has issued fresh recommendation as well as transfer order in favour of the lady teacher. So the school and DI should allow her to join”, the officer said.

An officer of WBSE in Calcutta said, “The school cannot prevent her to join ignoring board’s posting order”.

DI of school Nadia Khagendranath Roy said, “The lady teacher is unnecessarily making a hue and cry on the issue. We made it clear to her about the problem. Now to solve it, we have written to SSC seeking clarification…so until the clarification is received she cannot join”.