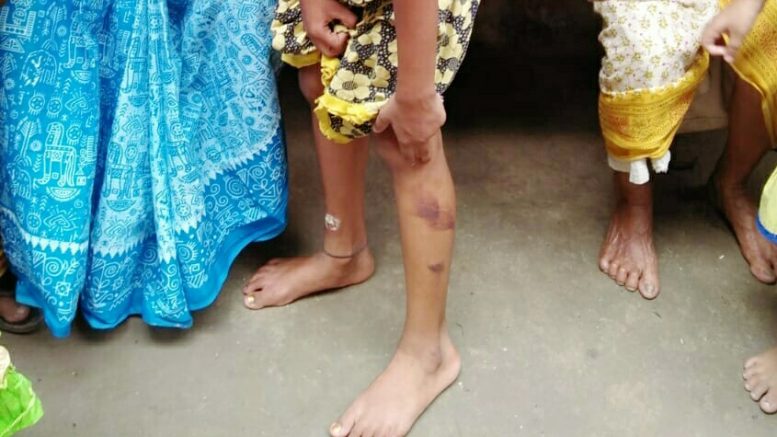 Burn spots on the legs of the girl

Krishnanagar, July 29: A 9 year old girl child was branded with a hot metal spatula all over his body by her maternal aunt and grand mother in Krishnagar as “punishment” because she allegedly took a note of Rupees ten from the aunt’s purse to purchase a copy without her consent.

The incident that occurred in Aurobindanagar area on Friday night came to light on Sunday morning after a neighbor posted a picture of the child, to his facebook wall drawing attention of the police for action.

As the picture went viral local people gathered in front of the house of the accused women and started agitation prompting police to arrest them.

Police later started a case against the child’s aunty Dolly Mohanta (32) and her mother Sandhya Biswas (54) on the basis of a complaint lodged by her paternal grand mother Uma Mullick. Police, meanwhile, recovered the girl, a student of class three, and admitted her to Krishnagar Sadar Hospital. But, she was later transferred to burn care unit of Saktinagar district hospital.

Local sources said that the victim was staying at her maternal aunt’s home for about past seven months since her mother started working as a domestic help in Delhi to manage financial constraints caused due to demise of her husband a few years ago.

Trouble began for the girl on Friday night when Dolly realized that Rupees ten was missing from her kitty. She asked the child, who confessed of taking the money for purchasing a copy for home work. But, this angered Dolly who stopped her food and branded her body with a hot spatula with which she was cooking.

Some neighbors hearing the girl crying rushed in and rescued her. “But the girl was earned a number of burning spots on several places of her body by then. We advised to took her to hospital, but the two women avoided”, said a neighbor.

When asked being a mother of child too, how could she acted so brutally, an unperturbed Dolly Mohanta said, “The girl in earlier occasion also stolen money. So I informed her mother about her act when she advised me to give her a lesson by branding her with hot spatula. So I deed it..”.

Girl’s maternal grand mother Chhabi is equally unperturbed about her act too. “I beaten up her and allow to brand her with hot spatula for sake of a lesson, else she would be spoiled and do such things again in future”,

A doctor at the Saktinagar hospital said, “The child has burn injuries on her hand, back, legs,  shoulder. Her condition is now stable”.

Nadia Superintendent of police Rupesh Kumar said, “We have arrested the two women and started a case for voluntarily causing hurt with an object. They will be produced before court tomorrow”.

Nadia district child protection officer Anindya Das said, “We will start a suo moto case against the women. We will take care of medical treatment of the child. She will be kept in a home until her legal guardians