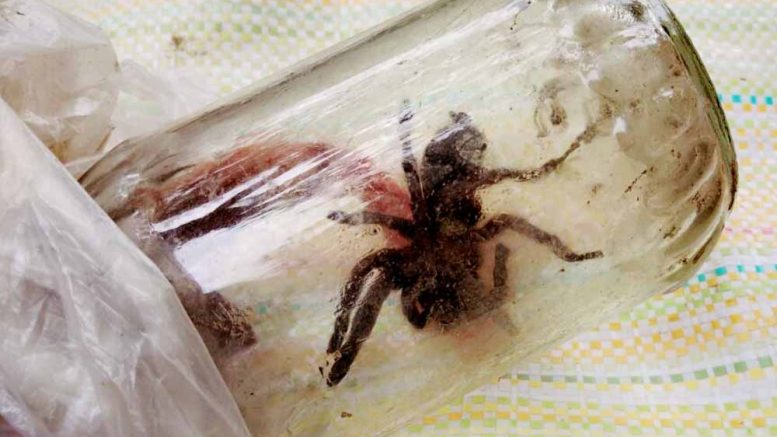 The tarantula kept inside a glass made bottle

Kaliganj, May 28:A 2.5 inch long spider found at Gobindapur village in Nadia’s Kaliganj on Monday morning. Kalu Seikh, a local resident caught the spider when he was cleaning jungles at his home. He said, the giant spider was hidden inside roots of some wild plants, which came outside when he was digging earth to remove the plants. Kalu was afraid initially, but eventually gathered courage and caught it using a container. Kalu became suspicious about the unusual look of the spider as he heard about its huge size from television and informed police. Police later informed the forest department officials. A local zoology teacher, who refused to be identified, claimed the creature looks quite similar to “Australian Tarantula”.  He said that this is species of Tarantula also known as whistling or barking spiders because of the sound it produces. “The tarantula is quite unusual in this geographical area”, he said. The tarantula has ten legs and a long fang of about 2.5cm long. The creature had, meanwhile, unleashed a panic in the area making them apprehensive about existence if more such species. A large number of villagers had gathered at his residence today to have a glimpse of the creature.