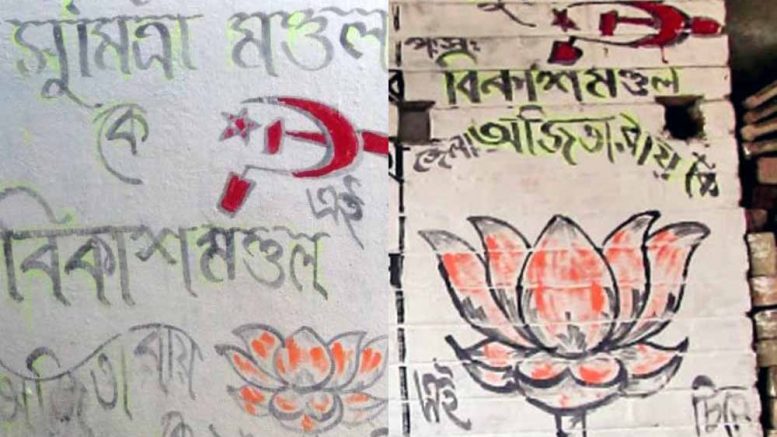 Joint graffiti of BJP and CPM in Karimpur

Tehatta, May 13: Disgruntled over party leadership to garner a strong movements against Trinamul Congress and for its failure to protect them from atrocities unleashed by the ruling party, a large section CPM activists at grass route level in several parts of Nadia district have made an “understanding” with BJP. The sole objective is to ensure one-to-one battle against Trinamul in the ensuing panchayat poll. While CPM Nadia leadership claimed that it gave no approval for such ‘understanding’, party workers claimed without the nod of leadership such understanding could never be made possible. Areas under Tehatta sub division including Karimpur-I block, the home turf of former CPM state secretary Anil Biswas leads in the chart of such ‘understanding’.

Except in zilla Parishad, in several seats of gram panchayat and panchayat samity in Nadia, the CPM either did not field any candidate or its workers fighting poll as independent candidates to gain support the BJP. The BJP in  other term filled the vacant seats left by CPM ensuring a one to one fight against Trinamul.

A District Secretariat member of CPM said, “Our workers are no more interested to fight poll in fear of Trinamul’s atrocities. They made understanding with other opposition parties so that Trinamul is not benefitted from division of opposition votes. The party leadership has nothing to do in this situation”.

But, how the leadership describes such strategy which is ideologically opposite to BJP and terms it as a “divisive force”?

CPM Nadia secretary Sumit De ruled out any such understanding with BJP. “We tried to field candidates as far as possible. In many places party activists refused to fight in fear of attack by Trinamul. It does not mean we have left the seat to BJP. Allegation of understanding with BJP is false and misleading. We have no connections even with those independents who have entered into adjustment with the BJP”.

A CPM Karimpur area committee member said, “In this poll we are ideologically fighting only at the ZP level. In the two lower levels we have been compelled to become liberal allowing workers to ensure one-to-one fight against Trinamul. So in many places we had withdrawn our candidates where BJP is stronger. The BJP has also done it similarly”.

The bonhomie became obvious recently when BJP workers joined a rally organized by CPM in Ranaghat. CPM MLA Rama Biswas was also seen walking in the rally. In Santipur and Ranaghat locals heard slogan like “inquilab zindabad” from rallies organised by BJP.

CPI(M) Nadia secretary Sumit De off late agreed that at grass route level “villagers” apolitically united against Trinamul. “This has nothing to do with the party’s policy. We just respected their wish”, De said.

A district committee member of CPM said, “It has become a compulsion for us to give nod to our workers as they are the victim of Trinamul atrocities. Now these people became united leaving their political prejudice. If we do not approve their decision at least to fight as independent, our organization will no more survive”.

BJP’s Nadia North committee president Mahadeb Sarkar said, “Politically we have no proximity to CPM. However, in some weak areas where no BJP candidates could be fielded, we have supported independent candidates. Many of these candidates are actually CPM activists who compelled to fight in disguise to avoid Trinamul threat”.