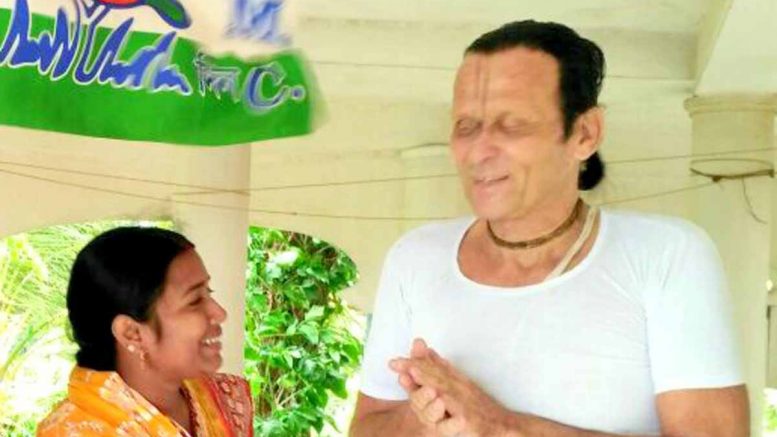 Nabadweep, May 13: Gadadharpran Das (66) of Nabadweep’s Hulorghat found elated on Sunday as his wait to caste vote for the first time in life nearly comes to end on Monday when he would appear at booth in Mayapur to exercise his voting right as an Indian citizen.

Gadadharpran is an American by birth with original name David Peter Trey who never voted in his motherland as he left it around three decades being driven by indomitable love for Lord Krishna.

The elderly devotee who eventually landed in Nabadweep adopting Hinduism and became an Indian citizen by marrying a Bengali woman around 20 years ago, would, however, exercise his voting right for the first time in life in this panchayat poll even though he secured his voter’s card a few years ago.

Gadadharpran, a painter by profession, feels that his love for India will complete a full circle on May 14 when he would appear at booth No. 12 of Mayapur-Bamunpukuar-II panchayat along with wife Raikishori Das.

“I was eagerly waiting since the panchayat poll was announced. The litigations made me little doubtful. I am happy that the date is closer now to end my wait finally”, said Gadadharpran, who has set up an ‘Ashram’ titled ‘Gadai Gaur Kunja’ in Nabadweep.

The elderly devotee does not want to speak about his early life. Repeated persuasions, however, revealed that Gadadharpran came in touch with some Vaishnabs in his home town California when he was youth. He later landed in Nabadweep and consecrated in Vaishnab way adopting “Yukta-Bairagya”.

“Since my early age I have been travelling many countries as an artisan in search of true aesthetical beauty. In most of my journey I was told that my endeavor would remain unfulfilled unless I visit India. I then started reading about India and learnt about the eternal love of Lord Krishna. I eventually came in touch with some Vaishnab devotees who had thrown some light in my way. I left home finally for India more than 30 years ago and landed in Nabadweep to be an Indian by all means. Casting a vote taking part in the democratic process of India was the only thing that kept my journey incomplete so far. But, on May 14 I hope to complete this journey finally”, said an elated Gadadharpran.

He, however, laments for missing opportunity for casting votes earlier. “As an Indian citizen I got my name enrolled in voters’ list a few years ago. But, I could not make it to appear in a booth”, he said.

Speaking about his choice in the panchayat poll, Gadadharpran openly announces his support for Mamata Banerjee.

“I have been witnessing her for long and became her fan. She has been doing a lot for the poor. So I support her”, Gadadharpran said in unequivocal term making the local Trinamul candidate Namita Mandal quite happy

Trinamul’s Namita Mandal, who visited his ashram to seek his votes said, “It is really good to know that a person with origins in abroad loves and respects our country and its rich culture so much. It is a pleasure that he also likes Mamata Banerjee”.