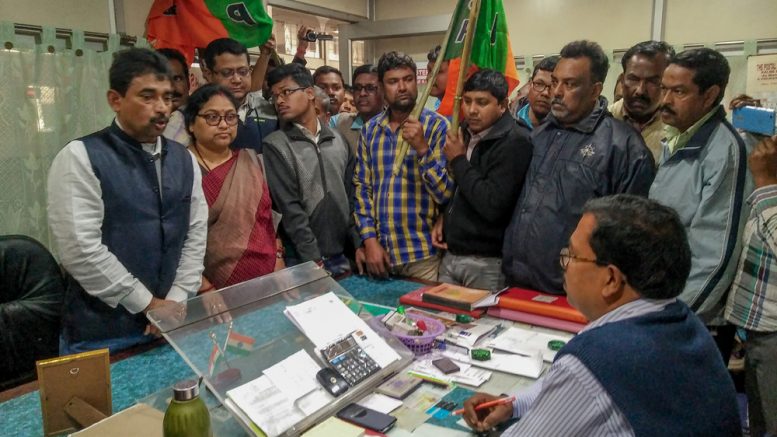 Krishnanagar, Jan. 14: In a counter initiative to encourage the postal officials so that they continue delivery of the Prime Minister Narendra Modi’s letters on Ayushman Bharat scheme, the BJP leadership in Nadia have began visiting post offices in the district from Monday.

The BJP leadership which has decided to visit every major post office in the district as well as to visit door to door to appraise about the scheme began the endeavor from Krishnanagar head post office when party’s Nadia (North) committee president Mahadeb Sarkar met the officials and assured to stand by them.

BJP’s visit to post office is aimed to boost up morale of the postal employee countering tbe threat.

The cover of Prime Minister’s letter

On Monday, Sarkar with about one hundred party activists entered Krishnanagar head post office, met officials, postmen talked to them and urged them to work without any prejudice and fear. He told the officials, “You are all central government employees. The government has assigned you a job in public interest for welfare of poor people. So you should do your job. Being the party at the centre we will extend our support…’

A senior officer of postal department in Nadia, however, expressed his sheer annoyance and concern about the way the two parties targeted the postal officials.

“It is like a tug of war between BJP and Trinamul…Both pulling us in their favour. This has created a serious security concern for us, particularly the way Trinamul leadership threatened us. The postmen are very afraid as they are to meet the deadline of delivery”, the official said.

“If you ignore my instructions, we will lock the post office from outside keeping all officials inside”, Dutta said.

In many places in Nadia, delivery of the Ayushman letter was prevented by Trinamul workers much before chief minister announced her pull out decision from the scheme. But, even after the exit Trinamul leadership decided to continue tirade as they found potential threat in the letter that could erode their support base.

“We will not allow Modi’s letter with his picture to enter Bengal household…” Dutta said.

“We will go door to door with copies of the letters to appraise people that how Trinamul conspired to reduce the medical benefit under the scheme by pulling out of the scheme showing a fictitious cause. Trinamul Nadia President Gourishankar Dutta, said, “Our protest is against certain principles. It is more against conspiracy of centre that deliberately using central government machinery against state government. Let the BJP find out people to man their party offices instead of post offices else people will shut down those too in coming days”.