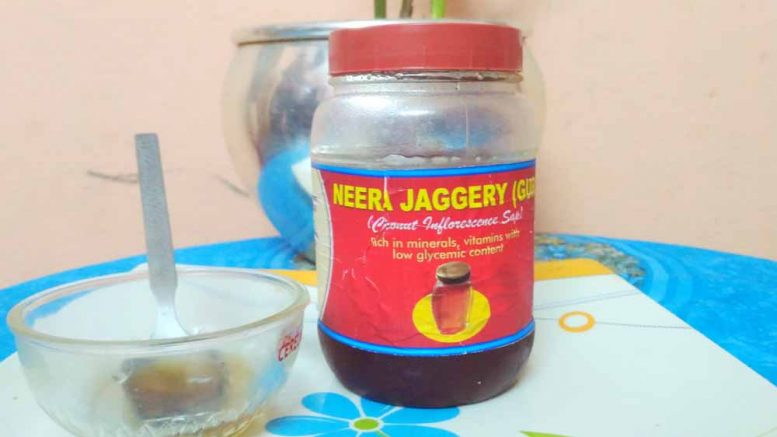 Mohanpur, Ja. 14: Bidhan Chandra Krishi Viswavidyalay (BCKV) has launched a project to help farmers to produce coconut nectar named ‘Neera’, to provide a new taste to the traditional sweet deserts for the foodies in Bengal. Scientists at BCKV said that ‘Neera’s USP is that it is incredibly delicious and at the same time has a very low ‘glycemic index (only 35) and low fructose percentage as well thus making it an obvious choice for the diabetics.

The Glycemic Index is a figure that relative represents the relative ability of a carbohydrate food to increase the level of glucose in the blood. It is in other terms a system of assigning a number of carbohydrate-containing food that increases blood sugar. The Glycemic Index itself is not a diet management plan but it is a sort of tool that helps to count calories or carbohydrates to guide and help choose foods.

With the support of Central Plantation Crops Research Institute (CPCRI), the Mohanpur-based agriculture university has come up to encourage confectioners in the state to add a new dimension to traditional sweet delicacies like Rasogolla, Sandesh as they have started producing these items using jaggery and refined sugar made of coconut sap providing a new taste.

Dilip Bhattacharyya, a retired doctor of Gandhi Memorial Hospital in Kalyani, who has been taking Neera-made sweets for the last few months, said: “I have personally examined Neera and found very low-level glycemic index in it. As a result, it is not at all harmful for diabetic patients to take sweets made of Neera despite its sweetness. I advise my patients to take Neera Rasogolla but, not the Nalen Gurer rasogolla”.

As a result, diabetics are now pouring in to purchase ‘Neera’ made sweets in handfuls of sweet shops in towns like Krishnanagar, Kalyani, Chandanangar, Balagarh, and some shops in Calcutta too.

For the last few months confectioners like Sumit Das of Kalyani or Surja Modak in Krishnanagar finding it tough to match the regularly increasing demand of ‘Neera’ Sandesh and Rasogolla.

Sumit Das said: “The Neera sweet has become very popular among diabetic customers despite its comparatively high price. There is also high demand for Neera jaggery and Neera Sugar. The demand is increasing every week”.

The flower sap is extracted from the raw coconut palm blossoms through a ‘tapping’ process. Coconut flowers covered with a box

Associate Professor Dipak Ghosh of the department of spices and plantation crops said: “This is a very delicate process. The saps are collected in containers that are affixed over the blossoms to prevent any waste and infiltration of foreign elements. The collected sap is later boiled to make jaggery. The refined sugar made is from the jaggery later”.

“Researchers have found that natural coconut flower sap contains 1.5% fructose when collected from the blossoms. Once it is separated from the sap, the fructose content reaches about 10%. In comparison to other sweeteners, such as honey, and sugar, this makes coconut nectar a low fructose sweetener – a healthy alternative for people with fructose sensitivities”, added Professor Ghosh.

The BCKV organized training for the farmers. “We also sent the farmers to Kerala-based CPCRI for advance training. The use of Neera to Bengal’s sweet is explored by us”, Professor Ghosh said.

Kaushik Ghosh, a farmer from Hooghly’s Balagarh, a pioneer in Neera production said: “I supply it to many confectioners. The demand is increasing gradually”.