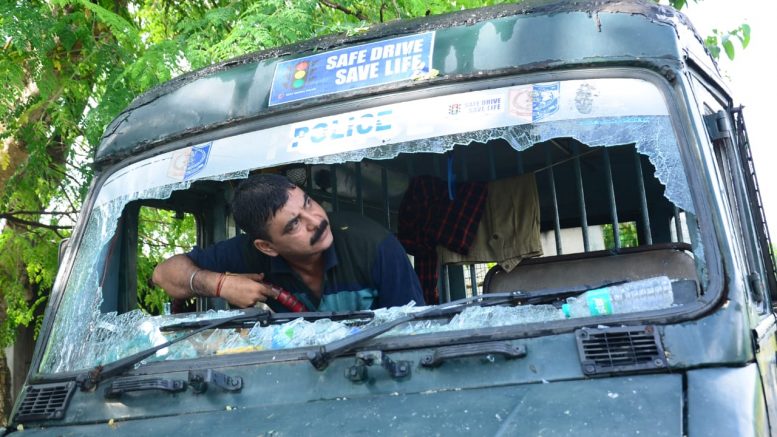 A damaged police vehicle after clash

Krishnanagar: Trinamul Congress failed to form board in at least two gram panchayats in Nadia on Saturday due factional feud despite winning by a clear margin as a section of the winning party candidates openly joined hands with BJP and helped it to form the board voting in its favour creating major embarrassment for the party leadership.

In Bagberia GP under Chapra block Trinamul despite winning 8 seats out of total 13 seats, failed to get control of the board as 1 of its elected member abstained voting and 3 others supported BJP’s nominee Sukanya Biswas for the post of pradhan. BJP’s victory by 8-4 vote created pandemonium as the administration postponed the formation of board. DM Nadia Sumit Gupta said, “There were some problems during formation of board. So the process has been postponed today”. Angry BJP supporters later went on rampage and vandalized the panchayat office. They also allegedly hurled bombs, beaten up Trinamul supporters and also damaged at least four police vehicles when it tried to disperse them.

BJP candidate Sukanya Biswas, however, accused administration of playing a partisan role. “Trinamul was never in a position to win panchayat here. They unleashed terror during poll. Later during counting they forced out us from counting station and secured winning certificate with help of administration despite trailing in most seats. So people here became angry today and understanding the reality three Trinamul candidates extended their support today”.

Trinamul member Munni Mahato, however, alleged that she and some other members were beaten up by BJP during voting. She said, “We were beaten up by stick. I earned wounds on my back. The armed BJP goons had threatened us to vote for them”.

Munni, Sampa Mandal, Bandana Roy and another Trinamul member were admitted to Saktinagar district hospital in Krishnanagar later on Saturday evening. These four members were among the seven Trinamul members who were present during the formation of panchayat board in Bagberia earlier on the day.

Local BJP leadership, however, refuted the allegations. “No member was beaten up. Some Trinamul members supported us realizing that the popular public support was not with them. The local residents became angry when the administration desperately tried to change the result of today’s board meeting in favour of the ruling party despite its candidate for the pradhan lost”, BJP’s Chapra block president Prakash Adhikary said

Meanwhile, Trinamul insiders revealed that a section of the leadership given to some candidates to go against the party to teach the ruling faction as the other was against flexing mussels unnecessarily.

Similarly in Dhananjaypur GP under Nakashipara block Trinamul failed to get power despite winning 15 seats in the 21 member body as 7 of its winning candidates joined 5 BJP and 1 independent member to defeat the party nominee for the post of pradhan. The Nargis Seikh, a Trinamul candidate stood against official nominee and eventually won by 13-8 votes with support of BJP and independent creating embarrassment for the Trinamul leadership. Nargis said, “Local MLA Tapas Saha divided the party here through his whims. We refused to go any more length obeying his whips and so sought help of BJP”

Trinamul MLA Kallol Khan said, “A section of our party nominated winning candidates joined hands with BJP to form the board. This cannot be accepted. We have informed the higher authorities of the party”.