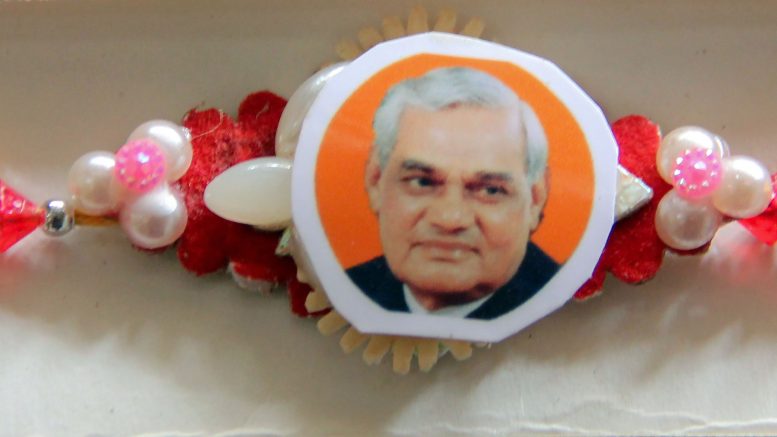 Krishnanagar, Aug. 26: Members of the peasant’s wing of Bharatiya Janata Party in Nadia on Sunday tied Rakhis pasted with thumbnail picture of Atal Behari Vajpayee as a tribute to him and to woo the rural people belong to farming community who had a special respect for the departed leader.

The special Rakhi, titled ‘Atal Bandhan’ was made in large numbers by the party workers, which were tied to the people, particularly in the rural areas with a mixed population among the farming community, in a bid to develop proximity and interaction with them who are Trinamul’s strong support base.

Party sources said that the objective behind the ‘Atal Bandhan’ rakhi is not just to promote a sense of brotherhood, rather to increase the party’s acceptability among the rural areas. “Atal Bandhan” rakhi being tied up

With this aim, members of the Nadia unit of BJP Kisan Morcha made the special rakhi using ribbons, sequins, studs, foam, fabric those are commonly used and finally pasted a thumbnail picture of Atal Behari Vajpayee on it. The party workers to save time had also procured similar readymade rakhis from market and pasted Vajpayee’s picture on it.

Kisan Morcha’s Nadia South wing president Nisith Biswas said, “We celebrate rakhi festival every year. But, since Atalji died, we decided to pay tribute to him on the occasion and to utilize the day to develop proximity to rural people changing our initial plan of celebration. So to manage time we had to make it easy by procuring readymade Rakhis from market and then pasting Atalji’s picture on it”.

“Atalji was acceptable to all. Even after death he has a special place in the heart of people. Even after death he is ideal one to clear all prejudices about the party as a liberal leader. So we used his picture to pay our tribute and to reach people,” Biswas said. Party sources said that the each Rakhi cost Rupees five approximately.

With this Rakhi, Biswas and his party men on Sunday travelled in remote rural areas from Gede, Krishnaganj, Hanshkhali, Badkulla, Dhantala and tied the special rakhi mostly on the hand of the farmers. “We are slowly increasing our support base among the rural people. The media and some parties often misled people terming BJP as a party of the rich. But, people in rural areas are gradually realized that it an aberration of truth. This changing situation reflected well in the result of panchayat poll as we secured around 35%-40% votes in several rural areas strengthening our position. This needed to be strengthened more”, Biswas added.

When asked if the BJP leadership in the district tried to exploit the Raksha Bandhan festival as a tug of war with Trinamul to woo the voters, party’s district wing president Jagannath Sarkar said, “This is not first time we are celebrating Rakhi festival. We have no need to do a tug of war with Trinamul Congress, who has off late begun celebrating rakhi borrowing elements from us. They have political compulsion and therefore even organizing Ram Navami, Hanuman Jayanti”