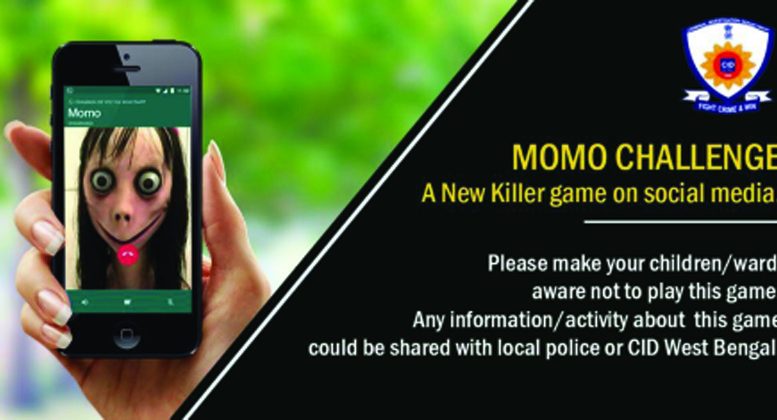 Bhimpur, Aug. 28: Police have detained a youth from Nadia’s Bhimpur on Tuesday evening allegedly for playing Momo challenge, an online game that indulges player to involve into violent acts but eventually abets to commit suicide.

Acting on a tip off by a villager, Police detained the youth, a motor mechanic by profession and seized his mobile phone. Police later also detained three other youths from the locality suspecting them of playing the fatal game.

The investigating officials said that the neighboring villager, whose identity they refused to disclose, tried to convince the youth appraising him about the negative impact of the game on the player’s mindset. “However, he remained adamant and continued to play the game that prompted the person to alert police”, an officer of Bhimpur police station said. Around a year ago online game called “Blue Whale Challenge” got viral that led many teenagers to commit suicide across the globe. Now a fresh online challenge named as “Momo Challenge” arrived. Momo, the game operators in disguise of a doll with weird horrifying look, encourage people to do many dangerous acts that even include murder. But the operators eventually abet the player to commit suicide. Police sources said, agents offer players to play game generally through WhatsApp message. If a targeted player refuses to play, Momo operators make his life a hell. Police officials said that investigations made so far to trace out Momo base have revealed that the suspected accounts those operating the game appear to be connected to three numbers based in Columbia, Mexico and Japan.

Meanwhile, police have been examining the how the youth in Bhimpur accessed the online challenge. “We are trying to find out how he accessed the game? Is it through a message that attached a link sent by the operators or through any other way,” a police officer said.

Police authorities have decided to talk to the youths in detail and to arrange counseling sessions for them to make them realize about the inevitable impacts of this deadly online game. “We will take all necessary steps so that these youths could come out of the clutches of the Momo challenge soon”, a police officer said.

In last week CID issued a warning on its portal about the deadly game and urged people to provide information or activity about the game.

CID in its massage said, “Share any information or activity about the game with the local police or with the CID”.