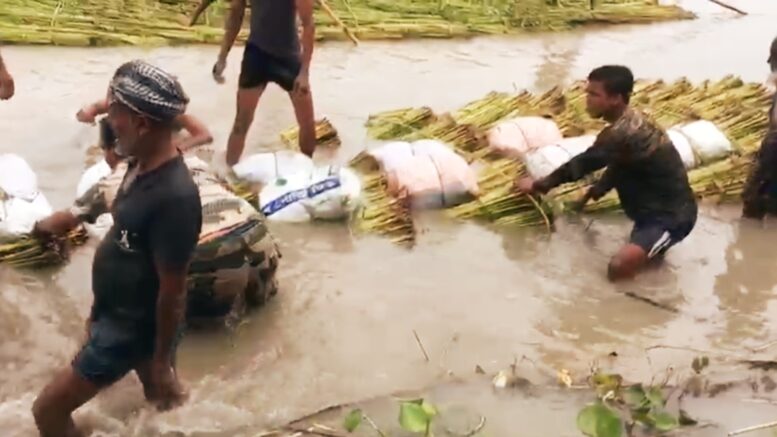 Packets of Hilsa tied to jute bales being recovered

Kolkata, Aug. 22: A patrolling team of the Border Security Force attached to 141 battalion seized 600 kg Hilsa fish, worth around Rs.9.6 lakhs, from smugglers at Murshidabad’s riverine border on Saturday evening.

BSF sources said that the smugglers were trying to push the consignment of the prized fish into Indian waters by packing them in polythene concealed inside bundles of jute, which were ostensibly being floated down the river for agricultural retting (soaking of the fibre). Sources said this is the second such smuggling attempt, of Hilsa, from Bangladesh to India identified this fishing season. On August 5, the BSF had seized 126 kg Hilsa being smuggled to India on an export truck through the Petrapole border in North 24 Parganas.

Senior BSF officials attributed the thwarting of the smuggling attempt to the success of the ‘Zero Trafficking Campaign’, launched by the South Bengal Frontier.

A major drop in the catch of the iconic fish has been witnessed this year apparently owing to reduced economic activities at sea owing to the Covid lockdown. Earlier this month, around 800 trawlers set out to catch Hilsa in coastal Bengal but almost all returned empty. The gross amount of the catch is so far only around 25% of the projected catch estimated for August, consequently creating a huge demand for the fish in markets.

Sources said the Bangladesh government in 2012 had banned the export of Hilsa to India owing to “low availability” and for “price control” measures demanded by local business associations.

Last year, an exception to the embargo was made by the Sheikh Hasina-led government for a one-time ‘Durga Puja gift’ export of 500 tonnes to India. Fish traders in India claimed that the embargo had “exacerbated” the smuggling of Bangladeshi Hilsa to India, particularly in Bengal. Sources said that even though the production of Hilsa in Bangladesh has been increased since 2012, it is yet to regularise its export through official channels to control smuggling to India.

“As a result, Bangladeshi Hilsa is smuggled to India every year, particularly during the monsoon because the fish has a huge demand in India,” said a source.

BSF officials said the smugglers likely tried to exploit this opportunity to meet the demand for the silver-lined fish from Bangladesh, which migrate to the rivers for spawning in sweet waters and are caught there.

BSF sources in Calcutta said, acting on a tip-off, two teams of the 141 Battalion were dispatched from Farzipara and Char Bhadra outposts in Murshidabad for an ambush. While patrolling on speed boats on a stretch of the river Ganga, BSF personnel spotted men swimming through the riverine stretch of the border while pushing away bunches of jute plants towards the Indian side.

A BSF officer said, “Initially it appeared that the farmers were retting the jute plants, merging it into the water before extracting the fibre. But eventually, it turned to be suspicious as the persons pushing the jute bales started fleeing the BSF boats. Our personnel then gathered the bales and searched thoroughly when they found several packets of Hilsa attached to the bales”.

Commanding officer of the 141-Battalion, N.S.Rautela, added, “The entire consignment of the fish was later handed over to the customs authorities”. He also said that the smuggling attempt of the Hilsa was thwarted owing to the “strong alertness” of BSF personnel.