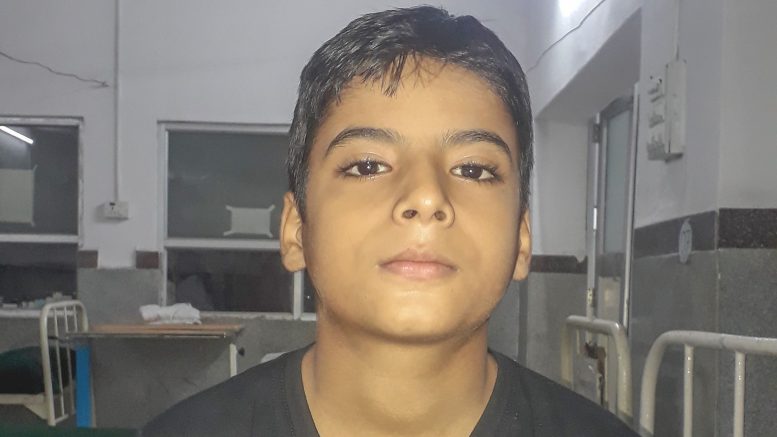 Shimurali, Sept. 25:  A class six boy of a Kendriya Vidyalaya from North 24-Pargana’s Kanchrapara who was allegedly kidnapped on Monday afternoon from close to his house, had escaped from the clutches of his kidnappers by jumping off a Santipur bound running train at Shimurali rail station in Nadia around three hours later in the evening.

The boy, Palash Kumar Choudhury (12), a resident of city bazar area in Kanchrapara sought help from a railway hawker at the Shimuali station who helped him to call his father using his cell phone.

The hawkers later in night handed over the boy to his father Navin Choudhury, a fitter at Kanchrapara Railway workshop, who on Tuesday lodged a complaint at Bijpur police station against unidentified kidnappers.

Police, however, yet to start a case. “We will quiz the boy first before initiating the necessary investigation. However, quizzing could not be possible yet as he was admitted to hospital”, said an officer of Bijpur police station.

Family sources said, the boy had to be admitted to Kanchrapara Railways hospital late on Monday night as he suffered injuries on his legs while jumping off on the Shimurali station from the running train.

He could not identity the kidnappers. His parents also failed to throw any light on the suspected kidnappers. “I have no idea who were behind the kidnapping. None made any ransom call also”, Boy’s father Navin Choudhury said.

Palash told his parents that at about 4pm on Monday two men riding a motorcycle kidnapped him when he was going to visit a doctor with his elder brother Pritam.

“My son said that two men grabbed him around 50meter away from our residence. My elder son Pritam was walking little ahead of him. The kidnappers put a piece of cloth on his nose to make him unconscious. He regained consciousness later in a running train when he found himself its floor close to gate. He was covered by four persons. Nevertheless,  he without a second though jumped of the train when it started leaving Shimurali station where some hawkers helped him to make contact with me”, Palash’s father Navin Choudhury said.

Palash said, “The men who intercepted me told that my father called me back home. I suspected something wrong and tried to flee. But, one of them grabbed my shirt. The other then put a handkerchief on my nose and I started feeling drowsy. I could only recall that they put me on a motorcycle and later in a car….Finally I found myself in a train…in a quite unusual state seated on the floor close to the gate. A strong whistle of a train woke me up. I decided to jump of the train even though it started moving”.

Railway hawker Suman Biswas who helped Palash said, “I was shocked to see the boy fell from the running train. But, he appeared to be very brave. I took him to a shop when he told me that some persons were taking him away in the train…but it by then left the station. So I give my phone from which he called his father”.

A doctor at Railways hospital in Kanchrapara said, “The boy has some minor injuries on his legs. But, he is under a trauma despite his initial bravery. He needs mental support to overcome the fear”.