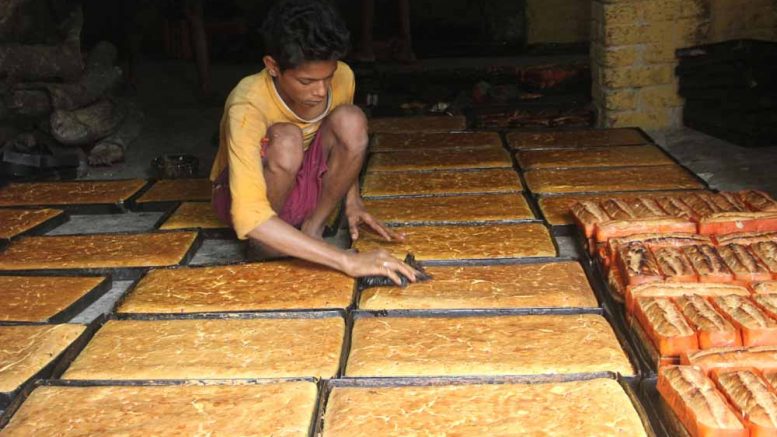 Ranaghat, Dec.25: A good number of small and medium bakeries in Nadia this Christmas have taken more private orders for cake from local residents taking the raw materials from them instead of making bulk quantity for retail sail as they could not procure raw materials as per their requirement due to poor acceptance of coins and note of small denominations by the wholesalers.

To avoid the trouble of transactions, a large section of bakery owners have preferred to remain satisfied by just taking the manufacturing cost of the cakes. A woman with her cakes at a bakery in Ranaghat.  Picture by Tito Chakraborty

The bakery owners started taking pre-Christmas booking from the first week of December along with raw materials like flour, butter, eggs, dry fruit, wine and other ingredients so that they do not face the trouble of procuring materials in cash.

Nadia has over 6% Christian population across the district, with major portions live in Krishnanagar, Chapra, Ranaghat, Santipur and Kalyani. A large section of this population including members belong to other communities this time preferred to take help of these bakeries.

A Bakery owner in Ranaghat said: “Most of our daily payments are made in small coins as we largely transact with tea stall, small shops. But banks do not take such small coins and notes of small denomination. The wholesalers from whom we procure raw materials also do not take such small cash. They prefer either big notes or cheque. But, we could not issue them cheque either as we could not deposit cash to bank. This problem forced us to reduce the production and to concentrate more on private order”.

Priya Ranjan Das of Ranjan Bakery said: “In last year I produced about 20quintols cake for retail sale. But, this time I have done only about 8quintal. Whereas I have served private order for about 2quintol cakes. I took raw materials from the customers as per their wished quality. I took Rupees 300 to 400 as manufacturing cost for per kg of flour according to quality of the cake they ordered”.

Sanjit Das of Das Bakery in Santipur said: “The problem of procuring raw materials has become so immense that the wholesalers were even reluctant to give materials on credit as per our requirement. As a result I have only manufactured about 5 quintal cake for retail sail, whereas served private orders for about 2 quintal taking raw materials. Usually I do not take private order over around 50kg earlier”

A manager of Nadia based branch of state bank of India’s said: “we accept coins and small notes. But it takes time to count them. But often the customers want to make it in hurry. It is problem to us as most of our branches lack staff. We have outsourced some person and engaged them for counting coins, but it still remains a problem”.

Subir Gomes, a cloth trader said: “I used make cakes at home. But this time I decided to go to the bakery with my preferred ingredients as they are quite expert in it. I got a cake made using 2kg flour and other ingredients”.

Rupa Banerjee, a homemaker in Ranaghat said: “I regularly buy cakes from local bakery, but make the Christmas special at home. but this time I took help of the local bakery as they offered me to make it special as per my choice and with ingredients given by me”.