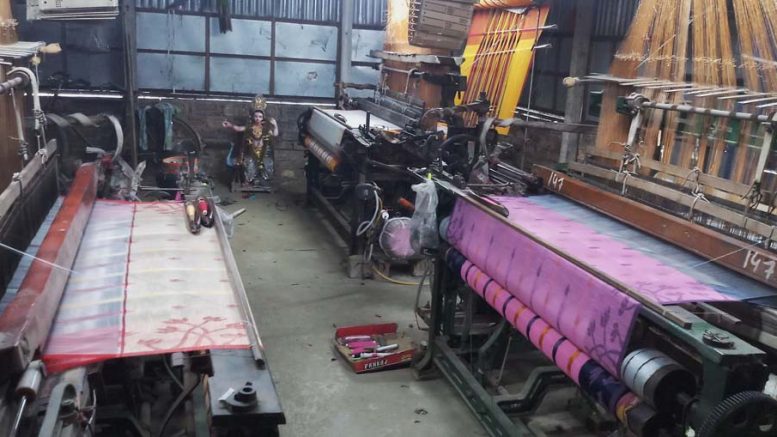 Santipur, April 5: Ajoy Dey, Chairman of Manjusha, a unit of West Bengal Handicrafts Development Corporation Limited has urged Bengal chief minister Mamata Banerjee for granting compensatory financial assistance for the 6.5 lakh weavers in the state who have been struggling for survival due to the ongoing nationwide lockdown announced by the centre to contain COVID 19.

In a letter dated April 1 addressed to the Chief Minister, Dey has appealed for granting a daily allowance of Rs.300 for the skilled weavers and Rs.200 for the unskilled ones as a special package since all the power looms, and handlooms are closed creating a tremendous survival crisis for them. Bengal has a large number of power looms and handlooms located in Nadia, East Burdwan, Hooghly, Bankura, Birbhum, Coochbear, which mainly manufacture Saree. As per the weavers’ census, the gross number of weavers (skilled and unskilled) involved with the industry in the state is 6.5 lakh. Around 2.5 lakh weavers out of the whole only work in Nadia’s Phulia, Santipur, Nabadwip, and East Burdwan’s Samudragarh.

But, since the nationwide lockdown was announced by Prime Minister Narendra Modi, all the power loom and handloom units were forced to shut down which eventually robbed the weavers of their daily income. At present, a skilled weaver can earn around Rs.400 per day whereas the semi-skilled weavers get around Rs.300. They are generally paid on a weekly basis, sources said.

Kamal Basak, a weaver attached to a power loom said, “Since the lockdown was announced the weavers were not paid their weekly dues since the power loom owners could not get their payment from the merchants. It is a chain impact, which has put weavers like me in deep trouble to survive along with family members”.

Sources said some small loom owners tried to continue productions, but the effort that obviously flouted the lockdown norms had to be suspended due to no supply of cotton yarn. A power loom owner in Phulia said, “Loom owners like me running out of money since there is no production and no consumption in the market. As a result, we could clear even the pending weekly dues”

Manjusha chairman Dey said, said, “This is a never before situation. The weavers have been suffering from a serious financial crisis. They are attached to several power-looms and handlooms on a daily wage basis. The lockdown has strongly told upon on their survival”.

“I, therefore, made an appeal to the chief minister Mamata Banerjee for providing financial assistance to the weavers as a special package for the lockdown period else there would be a serious crisis for their survival”, added Dey, who is also a former Trinamul MLA chairman of party ruled Santipur Municipality.

Sources in Nabanna said that in earlier occasions similar special financial assistance was provided to the weavers during flood since it seriously damaged the handloom and power looms. The financial help was directly credited to the bank accounts of the weavers. “However, so far no proposal to help the weavers have so far come up for consideration”, an officer said.

Dey said, “All the weavers are now enrolled with the e-government having individual weavers’ card containing their personal and bank details. So any assistance could be easily credited to the weavers if the state government considers their plight.