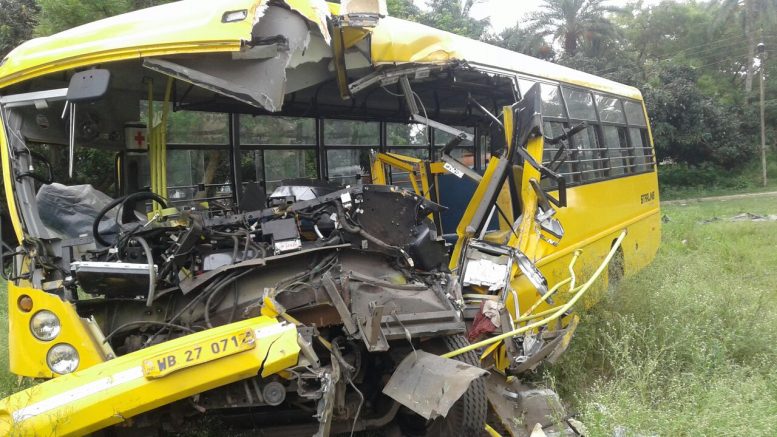 The fateful bus on Sunday morning.

Santipur: Two persons of a touring team returning from Digha to Nadia’s Phulia riding a bus were killed and 32 others injured in an accident on National Highway 34 in Udaypur village near Santipur when the driver of the bus allegedly fell asleep at the wheels during the wee hours of Sunday morning.

The bus that ran zig zag without any control for about 200 meter with panicked passengers watched helplessly crying for help as the driver was lost in slumber eventually rammed on the back of stationary lorry with a crushing sound killing a youth and the elderly cleaner on the spot as the later continued trying to wake him up, who, however, escaped unhurt at the last moment and went absconding since then.

The injured persons were admitted to Santipur state general hospital and JNM Hospital in Kalyani.

The bus was hired by Ashok Pramanik, a central government employee from Pbulia to give a holiday treat to family members and in law’s from North 24Parganas Gopalnagar and Bongaon on the occasion of his son Arghya’s 12th birthday.

Both Ashoke and Arghya escaped with minor injuries.

The accident occurred at about 2.45am while around half an hour ago the passengers advised the driver Sankar Halder to take a nap during a tea break at Chakdah as he was falling asleep repeatedly. However, Sankar ignored the advised and continued driving despite feeling sleepy.

Swarup Roy, one of the injured passengers said, “We were watching that the driver was dozing off repeatedly. We cautioned him as he was often losing control. In Chakdah, we took a break for tea in Chakdah when we also advised him to take a nap for an hour and we would wait for him. But, he refused. Later on several occasions he fell asleep as the cleaner and some other passenger tried to keep him awake. The last lap of journey from Ranaghat turned horrible as we watched the bus hit the lorry”.

Police have started a case against Sankar charging him for non culpable homicide not amounting to murder. However, the accused, a resident if Bongaon could not so far been arrested.

Meanwhile body of the two deceased identified as Kishore Sikdar (36), a resident of Gopalnagar and Manabendra Chatterjee (62), the cleaner, resident of Bongaon’s Dinabandhu Nagar were recovered from the debris of the bus and sent for post mortem.

On June 14 a team of 53 went to Digha. A private bus, which provides service to a private school in Bongaon was arranged by Ashoke’s in-laws. After spending two days in Digha, the bus left for Phulia on Saturday night.

Bus owner Bishu Halder, elder brother of the driver said, “I on several occasions cautioned him advising not to drive if felt sleepy. But, he actually paid no need to my advice”.

Abhijit pramanik, a relative of Ashok said, “The driver was in a hurry to return to Bangaon after dropping us at Phulia, so he was no mood to wait”