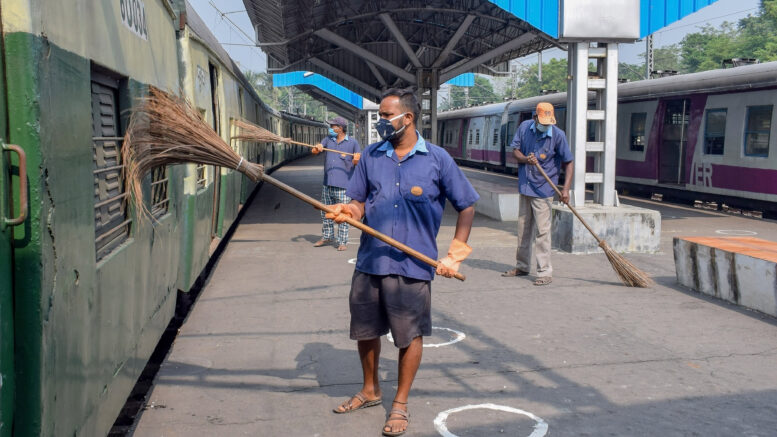 A man cleaning a EMU coach at a terminal station in Nadia. Picture by Abhi Ghosh

Kolkata, Nov. 8: The Eastern Railway authorities would extend the validity of the season tickets expired during lockdown to the extent of days the passengers had lost.

The passengers who had unexpired journey days left in their season tickets when the local train services were suspended due to the Covid situation, will be able to revalidate their tickets from the unreserved ticketing systems (UTS) counters from Monday morning (8 am).

Necessary notification in this regard will be issued soon to appraise the passengers so that they could avail of the local train service without hassle when it resumes service from Wednesday (November 11).

A senior official of ER’s Chief Commercial Manager’s office (Passenger Marketing Division) in Calcutta said, “For validation of the expired season tickets the passengers will have to visit the UTS counters at the concerned station at which they booked the ticket”. The local train service was suspended on March 24 following the centre had announced a nationwide lockdown owing to the Covid situation. Last week, the railways’ authorities announced the resumption of local train services from November 11 only after the state government gave its nod.

Since the local train service remained suspended for about seven months due to a pandemic situation with the railway authorities only operating a handful of staff special trains, protests had erupted at many stations in suburban areas. The protests coupled with clashes with general passengers eventually led the state government to hold talks with the railway authorities for the resumption of the train service.

Last week the ER authorities said that on Monday it would announce a detailed standard operating procedure (SOP) to resume the service in all the three divisions (Sealdah, Howrah, and Kharagpur) with only about 10-15% trains maintaining precautionary measures.

On Twitter railways minister Pijush Goyal said, “With adequate safety measures in place, this will enhance the convenience and facilitate smooth travel for the people”.

Meanwhile, as part of its preparedness, the ER authorities began cleaning and sanitization works of the train coaches which remained unused for the past seven months at the car sheds and different terminal stations.

An ER official said, “Such cleaning of coaches is a routine job which has, however, has special significance due to the Covid situation”.