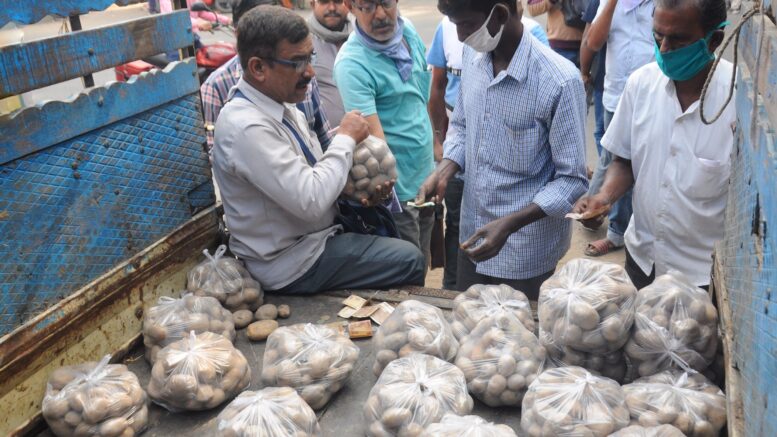 Krishnagar, Nov. 7: A section of vegetable vendors in Nadia’s Krishnagar allegedly abused the officials of the agriculture-marketing department and prevented them to sell potato at the controlled price near the Amin Bazar market in Krishnagar town on Saturday morning.

The local vendors forced the officials who came with a mobile stall, to leave the spot so that their business is not hampered due to the cheaper potatoes offered by the administration.

The incident angered the local residents who queued to buy potato had to give up and compelled to buy it at Rs.40 per Kg from the market since the stall which was selling it at Rs.25/kg only, had to be moved away due to protest by the local vegetable sellers.

Sub-divisional officer of Krishnagar (Sadar) Manish Varma said, “This is most unfortunate…we are looking into the incident and take strict action”

“Since the Essential Commodities Act has been amended, the price of potato being an essential commodity cannot be controlled like in the past. Nevertheless, the state government has been trying very hard to provide relief to the common people by selling potatoes at a controlled price through mobile stalls across the state. In such a situation this type of incident is not expected”, the SDO added further.

The district administration since last week has been selling potatoes at controlled rates engaging for mobile stalls. Women from self-help groups have been engaged along with the officials of the Agricultural marketing department to sell potato maximum of 4 kg per person.

Since the price of potato witnessed an unusual spike early in the last month, the state government announced to sell potatoes at subsidized prices through the agricultural marketing department from its buffer stock at Rs.25 per kg. Whereas in the city areas, the state government engaged the Sufal Bangla chain, in the district cooperatives and self-help groups have been engaged for the purpose.

Meanwhile, on Friday the state government in a bid to contain the price has issued a directive stating that no wholesale dealer will be allowed to store more than 25 MT of potato and onion. For small businessmen, the restriction on stocking should not exceed 2 MT. Following the issuance of the directives, officials of the state Enforcement branch have conducted raids at several markets in the state to check hoarding of potatoes and onions.

Reacting to harassment of its officials and members of a self-help group selling potatoes, an official of the state agricultural-marketing department said, “Such irresponsible behavior of the local seller would make the situation critical for which common people would be the ultimate sufferer despite the state government’s best initiative”.

A potato seller in Krishnagar’s Amin Bazar, however, refused the allegation of harassment. “I have been exclusively selling potatoes for a long time and totally dependent on it. So I appeal to the officials of the mobile potato stall to move away otherwise it will harm my business. I bought potatoes at a higher price and was compelled to sell with a minimum profit. So how can I afford to lose due to the mobile stall that has been offering potatoes at a cheaper price than me”?

Sanat Sandhukhan, a local resident said, “I was in the queue and waiting to buy potatoes, but the protest by the local potato sellers who are regularly hiking price unsettled my plan as the stall moved away”.

Local Trinamul leader and former councilor Swapan Saha, who managed the situation, however, termed the incident as ‘misunderstanding’. “The local potato seller urged the officials to move away so that they can also survive…but we have categorically told them that they should not dictate any such term…Moreover, only limited quantities of potato being sold which in no way hampered their business.”