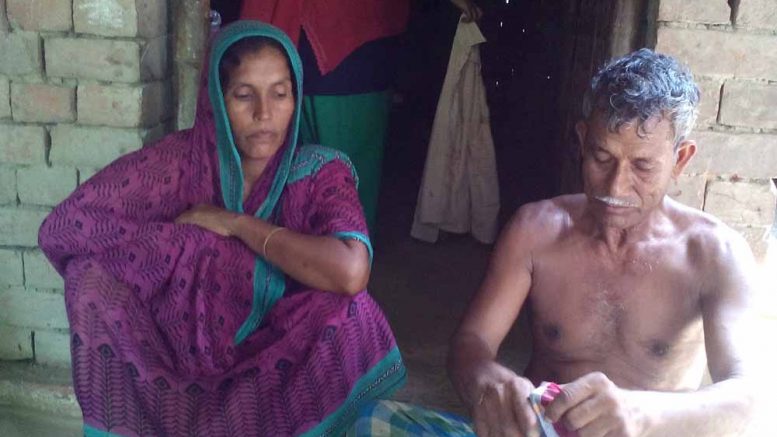 Tehatta, July 13:  An elderly farm labour and his wife from in Tehatta have installed 40 tubewells in their village utilizing the money they received as insurance benefit after death of their only son in a road accident to help the villagers to get rid of the water crisis they used to suffer throughout the year.

Taser Ali Sheikh (65) and Farzia Biwi (58) of Fataipur village whose monthly income seldom crosses Rs.3000, took no time to decide to utilize insurance benefit of Rs 2.5lakh for installation of tubewells instead of enjoying it personally.

As the people in his Fataipur suffer largely from water crisis throughout the year due to absence any water supply facilities provided by the administration, the elderly couple decided to utilize the money to install tubewells and to keep memory of their son alive in this way.

The Fataipur village, where the couple live, is located in Tehatta-1 block of Nadia district with a population of about 7000 people, who largely depended on around 20 road side tubewells to quench their thirst and to satisfy daily need.

As a remedy of the trouble they face, Taser Ali Sheikh and Farzia installed 40 tubewells in the village and surrounding areas spending Rs. 2-lakh, each of which costs Rs.5000.

The elderly couple have also decided to keep the balance Rs. 50000 for maintenance. For this they have proposed the villagers to form a committee which would be entrusted for the job. “Tubewells are the real lifeline here. We have often seen that tubewells once go out of order remained so for long. So we kept the amount in a fund for urgent repair and maintenance works”, Taser  said.

On January 6, 2015 the couple’s son Abdul Ahmed Sheikh, a student of class 9, died after he was mowed by a lorry on Tehatta-Palashipara road when he was going to take part in a marathon race on his bicycle organized by district administration to encourage young voters. He was taken to Tehatta sub divisional hospital later where he died.

Being devastated by demise of his son, the elderly farmer lodged complaint against the lorry driver at Tehatta police station. A police officer said: “The driver was arrested but granted bail by Tehatta ACJM court. The court, however, in April this year directed the insurance company to pay the insurance benefit to the bereaved couple being the third party involved ”.

In last month the insurance company paid Rs. 2.5 lakh to the couple, which they accepted with much reluctance.

“We had actually no need of the money. So we decided to use it for a noble case in memory of our son. I talked to my wife Farzia and proposed to install tubewells in the village, who also agreed to it as she knows well how people in our village suffer largely due to water crisis”, Taser Ali Sheikh said.

His wife Farzia Biwi said: “We hope our son will remain alive among us for ever in this way”.