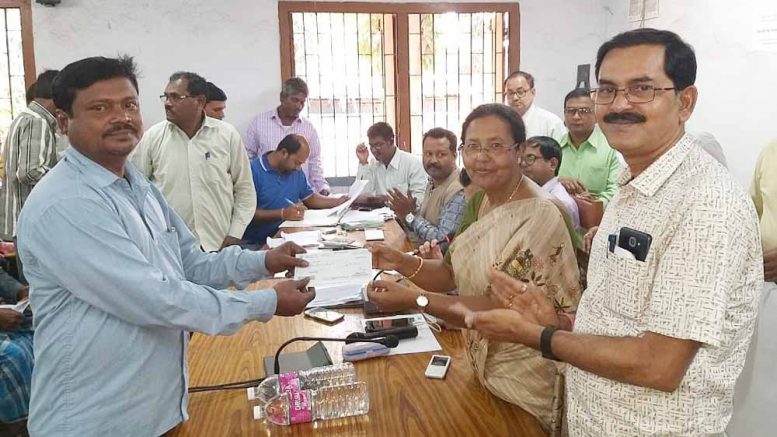 Haringhata, March 3: State government on Sunday handed over cheques of compensation to 121 farmers who have been cultivating on s piece of 100 acre land in Nadia’s Haringhata which ecommerce giant Flipkart had procured to set up a logistic hub.

The payment of compensation to the farmers ensured a clear land which eventually paved way for commencement of the project work by second week of March as wished by the company.

On Sunday the 121 farmers of Ainshpur, Panchpot, Balindi and other  village were handed over the cheques in presence of Flipkart officials at the Haringhata Block Development office. Senior officials of state commerce and industries department, WBIDC, Nadia district administration and local Trinamul MLA Nilima Nag and zilla parishad member Chanchal Debnath were also present at the programme.

Sub Divisional officer of Kalyani Unis Rishin Ismail said, “The farmers have removed their harvest. They are very happy receiving compensations. The land is clear now and Flipkart can begin work there”. The land located within 358 acres Haringhata Industrial Park originally owned by West Bengal Industrial Development Corporation , which was sold to Flipkart in last year. The company had announced that it would set up Rupees 991-crore logistic hub creating employment opportunity for about 18000 people.

But,  decision to clear the land created problem to the farmers who claimed huge financial loss if their crops and vegetation were removed premature.

Nurul Islam, another farmer said, “I am thankful to government as it considered our problem”

Flipkart is expected to complete the logistic hub hopefully by the beginning of 2021, through one of its subsidiary Instakart Services Private Limited,.

The Haringhata hub will be the second such hub of the company after Bangalore, which would be developed to provide service to the market in the entire eastern region.

The identified land of the project is around 40km away from city airport and well connected with NH12 as well as Kalyani Expressway.