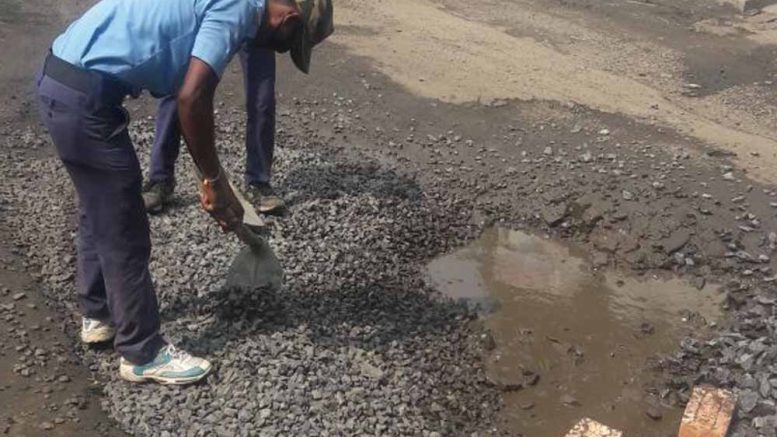 A civic volunteer repairs the road in Govindapur of Santipur

Santipur, April 22: Fed up with several ditches on a large stretch of NH34 and with the apathy of the National Highway authorities to repair it, a team of Santipur police in a rare incident took the tasks of repairing it by themselves without waiting more. On Sunday evening a team of ten police officials and about a dozen civic volunteers led by officer in charge Raja Sarkar joined hands and filled up the ditches and potholes placing bricks to make about 700-meter stretch road in Govindapur area accessible for the vehicle users.

Some local brick kiln owners provided the bricks free of cost to undertake the repair works of the road to police.

Local residents and businessmen alleged the stretch in the Govindapur are was never took up for maintenance by the National Highway’s Krishnanagar based project directorate authorities, even though it took up repair works in other areas while executing widening works simultaneously.

Sukrit Mandal, a local resident said, “The condition of the road in Govindapur area is horrible one. There are several ditches of about 2ft deep making the road literally inaccessible. Several appeals to the NH authorities failed to evoke any response. The recent spate of thundershower made things worse for us. It is really great that police has acted in such way to make the road at least pliable”.

Nripen Das, a vegetable seller, “There is no existence of road at all. The black top of the road is missing for over a year. Mud has come out and the road has become literally a drain. A mild rain inundates the stretch causing tremendous problem for the vehicles as well as to us. In dry season we cannot live there due to heavy dust”.

Officer in charge of Santiur police station Raja Sarkar said, “For over past one year the stretch of NH34 in Govindapur is in a very bad state. Police and district administrative appealed to the NH authorities to take up repair works.. But, the NH authorities never bother to respond. The recent thunder shower made the condition worst as several heavy vehicles created for which vehicles either being overturned or broke down disrupting traffic movement for over several hours. So we decided to take up the in own hand”.

“We informed our higher authorities for their approval and sought helps of the brick kiln owners. We took up the job yesterday once they given their nod”, said OC Raja Sarkar.

An officer of NH’s Project Directorate in Krishnanagar said, “The widening works of the NH34 in Govindpur area would be started soon. The area is low lying for which we have sent a proposal for raising the level, which is yet to be approved. This has caused delay. We are avoiding short term maintenance in the stretch. We have proposed to raise the level and make the road better.