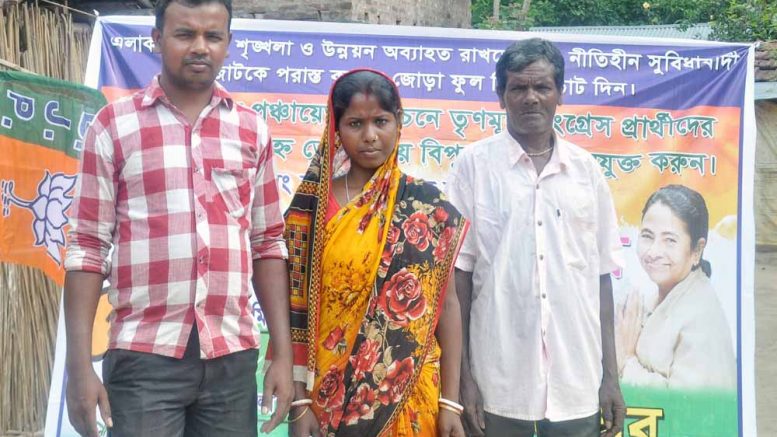 Majhdia, : Three members of a family in Nadia’s Majhdia are all set to fight against each other making the ensuing gram panchayat poll a family affair. At a time when political enmity soured the personal relationship, Laxman Roy, Bablu Roy and Aduri Roy of Adityapur-Roypara have preferred to make it an exception keeping their family bonding above their  political rivalry. As a result, the violent rivalries which the state has been witnessing for the past few weeks, are missing in the Roy family.

In next month Bablu Roy (30) would fight to retain the Seat No. 43 of Taldaha-Majhdia gram panchayat for Trinamul Congress his “boudi” (Sister in law) Aduri and “Kaka” (Uncle) Laxman would do their best to prevent his easy sailing being  BJP and CPM supported independent candidate. The trio without prejudice claimed that it is their family bonding would triampant ultimately.

“Whosoever of us wins the poll, it will be from our family and work for betterment of our village”, said Aduri, 25, of BJP.

The trio live in same plot in Adityapur Roypara under different roofs. For last three week’s, the trio has made it a practice to leave home together for campaign in the afternoon. While in the morning Laxman and Bablu remain busy in agricultural work, Aduri completes her cooking. They begin campaign from the afternoon.

Present head of the family Laxman Roy, who is a CPM backed Independent candidate said, “We have different political faisths and we raise our voice in support of our favourite political parties. But, we leave it aside when return home. We never bring home our political differences. We have mutual understanding and respect for individual political faith”.

“We keep our personal bond above all and so it matters little who supports whom”, added Laxman Roy.

Bablu said, “It is the political compulsion only which only drawn a difference among us that too only outside home. One can understand our strong bond from the fact the fact that I accompanied my boudi to the block development office when she went to submit her nomination as a BJP candidate. There was no problem, still I was with her as her brother”.

Aduri, a homemaker who is member of BJP’s Mahila morcha, said, “The reason of such strong bond is that we do not judge other in terms3 of their political belief. Moreover, when our common goal is development then why should we fight for trivial political issues”.

The trio has meanwhile individually decided their immediate priority if won the poll. While Bablu has planned to reform the ICDS centre’s kitchen and toilet, Aduri decided to ensure poor people get free housing and Laxman wants lights in lanes.

Trinamul nadia president Gouri Shankar Dutta said, “We always advocate for personal bond above political identity. This family is an ideal example of such bonding”.

BJP NADIA North president Jagannath Sarkar said, “The Trinamul should learn lesson from their candidate like Bablu, who respect personal bond over politics and ensured that his opponents submit nomination”.