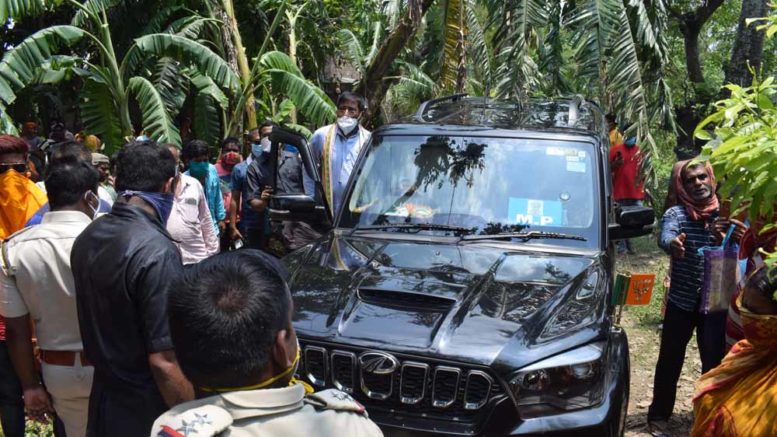 Santipur, June 02: Santipur Police have started a case against Ranaghat BJP MP Jagannath Sarkar allegedly for roaming outside flouting the home quarantine advice issued to him by Nadia’s Chief Medical Officer (health) on May 25.

Police have accused the MP of non-compliance of the guidelines by a public servant under section 188 of IPC and under section 51(b) of Disaster Management Act. If convicted a person may be imprisoned for a term which may extend to one year or with fine, or both.

The Nadia CMOH through a letter advised the Ranaghat MP to remain home quarantined for two weeks as a precautionary measure in ‘larger public interest’ since he allegedly came in close contact up a group of migrant labourers flouting the safe distancing norms while visiting three quarantine centres in Nabadwip on May 25.

But, the BJP refused to receive the letter of May 26 and arguing that why such home quarantine advice not issued for Trinamul leader Bimankrishna Saha who also visited those quarantine centres along with party activists after his visit.

Since May 26 Santipur police have been chasing the MP regularly, trying to prevent him from going outside to ensure that he stays at home quarantine. But, the MP on all the occasions went out flouting the advice. There was a repetition of the same on Tuesday too as Sarkar left home ignoring police appeal to stay at home that prompted the police to start a case against him.

Ranaghat Superintendent of police V.S.R. Ananthnag, “When so many deaths are occurring in the country regularly it is the minimum responsibly we expected from an MP..We compelled to take legal action against the MP for flouting the directives of the CMOH”

Accusing the district administration of maintaining a double standard, he further alleged, “If I have done any mistake Trinamul’s Bimankrishna Saha also has done the same and he should have been served similar quarantine notice”. “I will comply with the advice only when Bimankrishna Saha will be quarantined at home”.

Police have been acting on desperation as per the instruction of their political bosses to keep me confined so that I don’t get the opportunity to expose the corruption of the administration”, the MP alleged further.

An officer of Santipur police said, “We urged the MP to stay home up to June 9 until the expiry of his home quarantine period. But, he refused to listen”. The police team later tried to prevent the MP in Ranaghat and later in Chakdah. But, they failed to bring him back home on both occasions. In Chakdah angry BJP supporters staged a demonstration in front of the local police station for harassment of the MP.