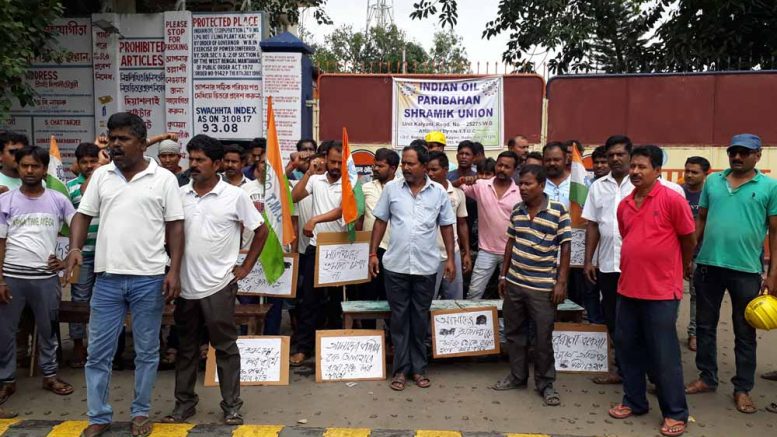 Kalyani, July 9: Dispatching of Liquid Petroleum Gas (LPG) cylinders from the Kalyani based bottling plant of Indian Oil Corporation was affected since Tuesday morning as over 250 truck drivers of different carriage agencies have stopped work for indefinite period demanding immediate payment of arrear wages which are due for over last one year.

Around 254 drivers of about 30 agencies which operate 286 trucks gathered at the plant located at B block of Kalyani town and staged demonstration accusing the agencies of nonpayment of their dues and refused to load their vehicles until their dues are cleared.

The Indian Oil Corporation brings LPG from Haldia in tankers and bottles cooking gas in its Kalyani plant to cater to the requirement of North Calcutta, South Calcutta, North 24Parganas, Hooghly, Nadia and Murshidabad district.

The drivers delive4 these cylinders to the stockyards of the retail agents in the districts from where domestic supply is made.

The drivers have alleged that the agencies have not just cleared their dues for more than a year since their wages were increased, rather deducting wages on provident funds without handing over them any valid document.

Ajit Kirtania, general secretary of Indian Oil Paribahan Shramik Union said, “In last agreement, separate wages were adopted for 6 wheeled trucks and for 10 wheeled trucks. For 6 wheeled vehicles, it was decided that drivers will be paid Rupees 587 per trip whereas for 10 wheelers the amount per trip was decided as Rupees 956. But, for about the last ten months since tender for the new agreement was called, the carriage owners started paying us Rupees 587 as the common rate for both types of vehicles and thus depriving us of the legitimate dues. We persuaded them long but they started threatening us of elimination. So we left with no option but to go for an indefinite strike to realize our demands”.

“The gross amount of overall due would be around Rupees 35 lakhs”, Kirtania added.

A driver further alleged that the transporters have even not provided them the safety gear, a mandatory safety measure while driving with highly inflammable items.

“The safe package includes jacket, special shoes and other items which each cost about Rupees 3000. But no drivers are provided with this safety gears as we are being forced to drive the vehicle to earn living”, a driver said.

Some of the officials of the carriage agencies present at the plant today to persuade the drivers, but they refused to resume service.

Union secretary Kirtania said, “We have submitted a charter of demands before the labor department in Calcutta. A meeting was held, but nothing conclusive came out”.

Balaram Majhi, a transporter said, “The drivers were repeatedly assured that all of their dues would be cleared, but they remained unconvinced. Moreover, they submitted a charter of demands on their grievances on which meetings are being held. So when talks are on such a strike is absolutely illegal and uncalled for. We will urge the drivers to reduce work as early as possible forgetting the differences…and everything will be settled soon”

An officer of Indian Oil in Calcutta said: “No driver or any union leader has so far told us anything officially about nonpayment of dues despite many of them often talk to us at a personal level. I have heard that some differences have cropped us between the carriage agents and drivers on certain issues. We have requested them to settle differences and restore normalcy in public interest else a crisis in LPG availability would be created”.