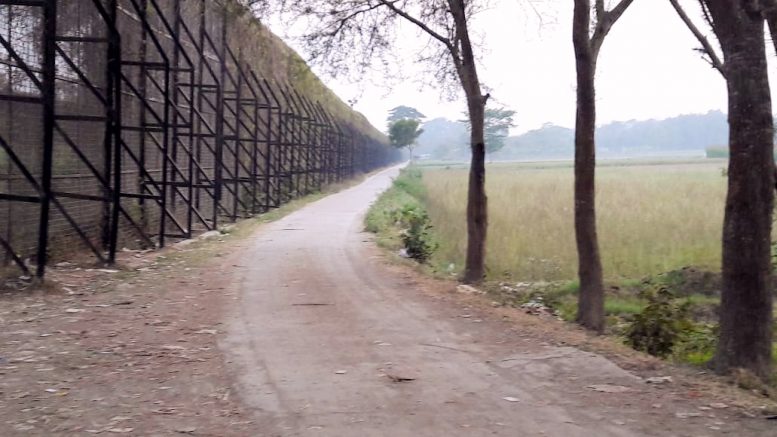 The road to be widened in Gede

Gede (Nadia), Dec. 02: A stretch of 800 meters of an existing concrete road is to be widened soon in Nadia’s Gede as a route for cargo movement to carry out export and import activities with Bangladesh.

The said road connects Darshana on the other side of the border in Bangladesh and is widely used by people of both countries to cross the border on foot, to be made a “parallel” of rail route goods movement between the two countries.

The Department of Revenue has already issued a notification for the development of the road stretch in Gede and asked its officials to take up the matter with the Bengal government, respecting the demand by the Bangladesh authorities.

However, the work could not so far be taken up as the state government could not take up the land acquisition process “in absence of any official communication” by the centre’s Revenue department, a state L&LR Department official said.

“We are aware of the project. The centre has notified it. Some officials of the customs department at the local level made contact with us. But there is no direct official communication from the centre with a detailed proposal…”, the official said.

“The proposed widening works required land…land also required for approach road and for the parking lot. So in absence of any official communication, we can do nothing”, a state government official said. At present export and import-bound goods move only by train through the existing rail link between Gede (India)-Darshana (Bangladesh). But, in addition to the rail mode, an optional road link for truck movement has been planned apparently responding to a long-standing appeal of the Bangladesh government.

The initiative is being envisaged by the centre to develop Gede as a land port in near future with both rail and road links, quite similar to Petrapole in North 24 Parganas.

“We are ready on our part… the Gede land customs station (LCS) has already been made EDI (Electronic Data Interchange) enabled. Once the road is widened, the cargo movement would be allowed to begin”, a Customs official in Gede said.

“We are hopeful of a direct communication from centre soon so that the state can take up the land acquisition process”, the customs official said.

Gede Land Port Society, an organization of money exchangers and local traders, has welcomed the centre’s decision. They have already held talks with local farmers and submitted around 300 consent letters to the district administration obtained from willing farmers.

Gede Land Port Society, secretary Dinabandhu Mahaldar said, “Farmers are ready to give land…we on behalf of the organization have also offered land for parking…Local MP also offered funds from the LAD fund. Now we are waiting for centre’s direct interaction in the matter with the state government”.

Local BJP MP Jagannath Sarkar told  The NfN, “I am hopeful that work will be taken up soon….”

A senior official of the centre’s Revenue Department said, “Gede rail station has been working as a land port as export-import goods move to and from Bangladesh through this station. At the same time, this station is a functional immigration check post as people cross the border both by traveling by train and by walking through a stretch of road. So considering the existing infrastructure we have been contemplating making the Gede-Darshana road route operational for cargo movement as early as possible”.

Money exchangers and local traders in Gede have welcomed the centre’s decision… The traders from Nadia and adjacent Bangladeshi district Chuadanaga for the past several years have been demanding for restoration of an abandoned stretch of 3km road connecting Nadia’s Tungi and Chuadanaga’s Daulatganj which they claimed could come up as a viable alternative route to bring Dhaka closer to Calcutta reducing the road distance by over 100km between the two cities and provide a fillip export and import as well between the two countries.

“It would have been better to restore the road that was used up to 1971’s Bangladesh war for vehicular movement. Nevertheless, we welcome widening the parallel road of rail track…that would too help the bilateral trade. But, we would urge both the countries to reconsider reviving the Tungi road for bigger interest”, a trader said.