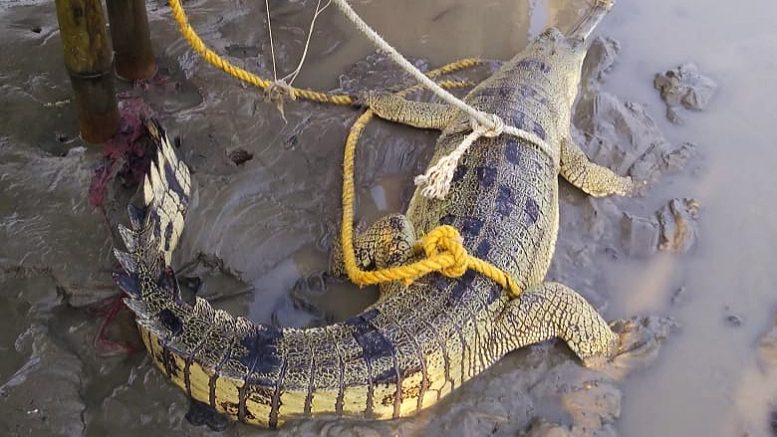 The fishing crocodile (Gharial) that was trapped in Chakdah

Chakdaha, May 17: A mature fish-eating crocodile, commonly known as ‘Gharial’ was trapped in a fishing net on the river Hooghly in Raninagar area of Chakdah town during the early hours of Sunday morning.

Fishermen Subhash Biswas and Dipankar Sarkar who were sailing a fishing boat on Hooghly spreading a net had felt a heavy catch during the wee hours. Being unable to drag it out, the duo sailed towards bank along with the catch to anchor the boat. “It was only after the sunrise we realized that our big catch is actually a Gharial with a long, thin snout and sharp teeth. We were horrified as it was big enough and looks like a crocodile, which we never found in this stretch of Hooghly”, said Subhash Biswas, who eventually incurred a loss of about Rs.20000 as the 9 ft long animal damaged his fishing net in a major way.

A large number of people from the adjacent villages gathered to have glimpse of the animal flouting the safe distance norm despite the Covid situation. A police team later rushed to the spot and controlled the crowd. A team of forest officials later took the animal to the Bethuadahari wildlife sanctuary. “Such fishing cats are quite unusual in Hooghly… We will conduct a medical examination and release it in the forest”, an forest department officer said.