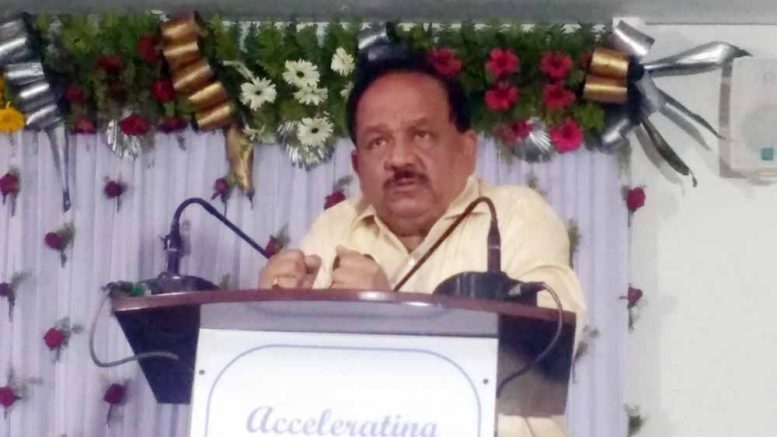 Kalyani, May 7: Union science and technology minister Dr. Harsh Vardhan today inaugurated a collaborative study cluster at the National Institute of Biomedical Genomics (NIBMG) in Kalyani bringing together five premier institutes with an aim of precipitating systems medicines in India.

The NIBGM being the catalyst of the project would bring together Indian Institute of Science Education and Research-Kolkata (IISER-K), Bose Institute, Council of Scientific & Industrial Research-Indian Institute of Chemical Biology (CSIR-IICB), Indian Statistical Institute (ISI) and Tata Medical Centre.

Harsh Vardhan, who is also union environment minister termed the endeavor as the ‘synergy’ among various science and research institutes across the country for which the Narendra Modi led Government has always taken special initiative during the last four years.

The minister launched the cluster, otherwise named as ‘Kolkata-Kalyani’ cluster after inaugurating NIBGM’s new campus in Kalyani on 30 acre land that incurred a cost of Rupees 150 crores. The new campus has been constructed by IVRCL.

Speaking at the occasion the minister stated that a coordinated approach in research and study collaborating important departments and institutions is the need of the hour.  “We need a coordination of premier institutions so that one can know what the other is doing and undertake a collaborative study. Earlier it often appeared that left hand never knew what the right hand done. There was hardly any coordination among different departments and premier institutions. We just tried to change this habit and made a synergy”, Harsh Vardhan said.

He hinted that AIIMS-Kalyani that is set to start functioning in March 2019, could also be included in the cluster in coming days. “If required AIIMS could be included in this endeavor, which the NIBGM could decide”, the minister said.

The centre in 2009 approved setting up of NIBGM in Kalyani in recognition of the fact that genomics hold the key to predict disease, improve diagnosis, and prevent disease and understanding medicine.

In 2011 it started functioning at the Netaji Subhash Sanatorium (NSS) with a mission to create necessary infrastructure to conduct and promote research in biomedical genomics for better understanding of public health. In 2010 the Bengal government allotted 30 acre land for construction of own campus. In 2011, IVRCL started construction of Rupees 150-crore campus with a deadline to complete by two year, which eventually took seven years to complete.