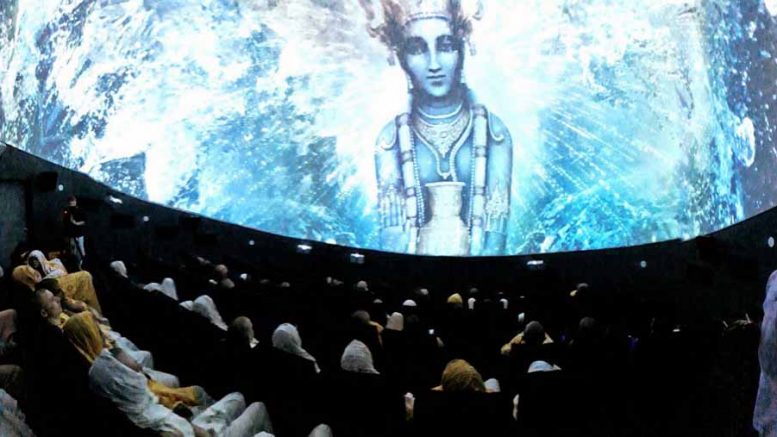 A show going on at Iskcon's full dome thetre in Mayapur.

Mayapur, May 7: The International Society for Krishna Consciousness (ISKCON) authorities has launched an immersive 360 degree dome theatre at its head quarter in Nadia’s Mayapur. The Authorities of this famous Religious  Organization have claimed that the hi-tech theatre with 108 seat capacity is first of its kind at any spiritual institution in the country. The theatre has been officially opened for public viewing early this week.

The Full Dome theatre is an initiative of Temple of Vedic Planetarium at present being constructed inside the Iskcon premise in Mayapur.

Iskcon official Sridama Das, a New Zealand national, who is the brain behind the theatre said, “Full dome refers to immersive dome based video projection environment where the viewer is surrounded by the video projection in a hemispherical angle view. The dome horizontal or tilted is filled with real time or pre-rendered computer animations, live captured images or composited environments”.

To begin shows at the theatre, the Iskcon authority launched two films titled ‘The Churning” and “9 Step to Eternity” were launched.