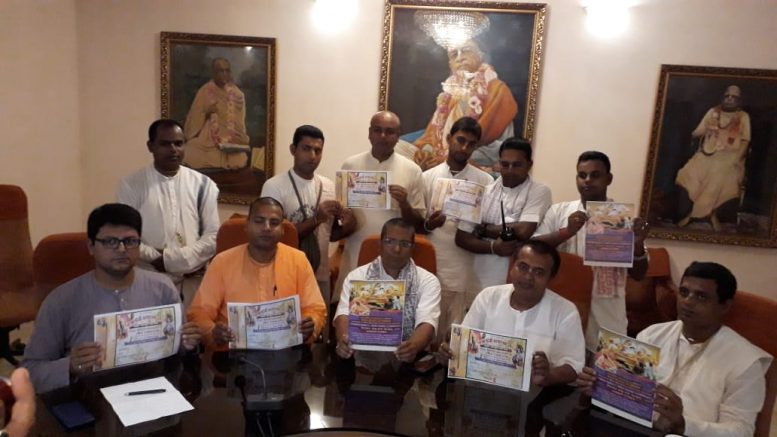 Mayapur, Aug. 22: Iskcon authorities in Mayapur on Wednesday have alleged that an organization based in Egra in East Midnapur has been using its name as well as that of the founder Sri Prabhupada to collect money illegally and cheating people bringing disrepute to the global organization.

The Iskcon authority on Wednesday has announced that it will take legal action against the Egra based “Iskcon Prabhupad Ashram, which is scheduled to organize a gala programme on the occasion of Janmashtami later this week where the state BJP president and party MP has been invited as chief guest.

Ghosh, however, said that he is not aware of any such organization. the officials of “Iskcon Prabhupad Ashram” has printed invitation letters and posters using a photograph of Dilip Ghosh….officials of the organisations, however, did not respond to calls and not even replied text messages.

Sources said that the Iskcon authorities were seriously felt embarrassed when some devotees from several areas of East Midnapur district appraised them that an organisation titled “Iskcon Prabhpad Ashram” is set to organise the Janmashtami festival in a big way and collecting money apparently using the name of the organisation. The accused organisation have also printed leaflets, banners and printed bills to collect subscriptions misleading people which the Iskcon organisation claimed has no relation with them at all. The Iskcon authorities have also decided to take legal action against the organisation.

Coordinator of Iskcon at its global headquarter in Mayapur Jagadhartia Das said, “This “Iskcon Prabhpad Ashram” has been falsely asking for donation using the name of Iskcon. We will take appropriate legal action against the organisation for bringing disrepute to the Iskcon”.

“We have also got some printed subscription receipts and none of which has any number. We have urged the local people not to be trapped by the organisation seeing the name of Iskcon. The organisation is neither affiliated nor authorised by Iskcon in any way. They are not even our authorised preaching centre” Das further added.

As per the leaflets and banners being circulated by the purported “Iskcon Prabhupada Ashram, Egra”, BJP state president and party MP Dilip Ghosh, local MLA Samaresh Das are scheduled to attend the programme as on the occasion of Janmashtami. The Iskcon authorities, however, did not speak about Ghosh’s proposed visit to the ‘fake’ organisation that is illegally using its name.

Jagadish Chaitanya Das, head of “This “Iskcon Prabhpad Ashram” in Egra when asked over the phone has admitted that the organisation has no formal permission from the Iskcon authority. However, he said, “We are followers of some senior Iskcon monks who verbally conveyed their approval to organise such programme. We are all devotees of Sri Krishna and doing no crime. We are aware of the of any formal approval from Iskcon as our Gurus never told him to obtain it”.

BJP state president Dilip Ghosh said, “I have no association with the Egra based Vaishnab organisation. They have used my name in their leaflets and banners without my permission. I have never consented to visit the programme. I will take legal action against the organisation”.