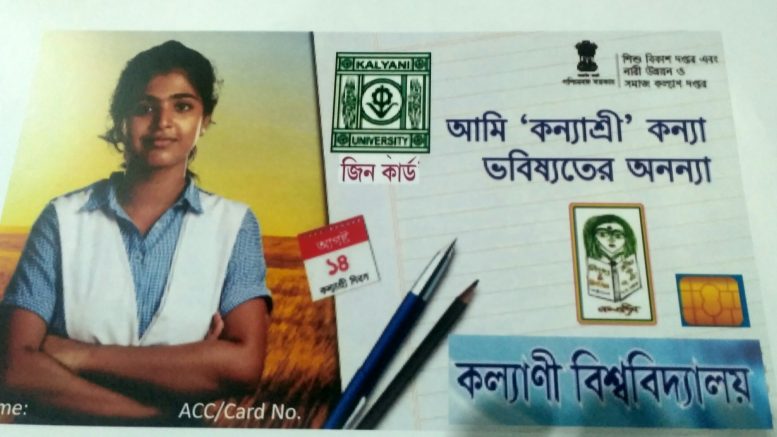 A sample of the proposed Gene Card

Kalyani, Aug. 15: Kalyani University authorities in a landmark initiative would issue ‘Gene Cards’ to its girl students containing their ‘Genetic Information’ so that they could combat the possible gene-related diseases well in advance. Launching the unique project in Kalyani on Wednesday, a first of its kind in the country, the brain behind it, vice-chancellor professor Sankar Kumar Ghosh, an expert in genomics, cancer immunology and DNA barcoding, said, “Since the structure of gene indicates possible diseases one could suffer from in future, the “Gene Card” would contain all relevant genetic information which can be used as a tool to combat gene-based diseases like Thalassemia, Breast Cancer and many other diseases in a large way”.

The initiative is implemented through the National Service Scheme (NSS) unit of the University, whereas Genome Science and Data Science wing of University’s School of Interdisciplinary Studies has been assigned the job of gene analysis of the girls and to hand over the cards to them within 2 months.

The University authorities have been contemplating to appeal Bengal Chief Minister Mamata Banerjee to tag the ‘Gene Card’ project to her flagship ‘Kanyshree’ Scheme so that girl students across the state can have their ‘Genetic Information’ to combat future diseases. Vice-chancellor Professor Ghosh said, “We are making a short film on the project to show it to Chief Minister so that she can understand the concept of the project”.

KU authorities, meanwhile, have requested Kalyani based National Institute of Biomedical Genomics (NIBGM) to provide technical assistance to the project. NIBGM Director Soumitra Das, who was present during the launching, said, “It is a great initiative. I have received a proposal from the Vice-Chancellor. It would be a pleasure to be part of the project”.

To begin with, 400 girl students which include Kanyashree beneficiaries of the University 100 similar beneficiaries of four schools in Kalyani, would be handed over the plastic card. Male students will be included in the project later, VC said.

“The Gene Card will be looked like an ATM card. Name, accession number photograph of the owner will be displayed on it. The data of the card will be highly secured and confidential and can only be accessed by its owner using the one-time password (OTP)”, said Professor Sukhen Biswas, in charge of the University’s NSS unit.

The online enrollment of individual data of the girls to University’s server has begun on Wednesday.

“The girls will be called next week for physical appearance to provide their blood sample and swab for DNA (Deoxyribonucleic Acid) analysis and genetic studies for the preparation of the cards”, said vice-chancellor Ghosh,

“It is the DNA that stores “Genetic Information” which eventually indicates well in advance that a person is a carrier of a particular disease or most likely could suffer from any specific type of disease which his or her previous generations had also suffered”, Professor Ghosh added.

Professor Manideep Pal, head of the Gynecology Department at JNM Hospital and College of

Medicine, Kalyani said, “The idea of the Gene card is very pragmatic.  This will help in premarital genetic counseling and prevent the birth of Thalassemic children largely. If a girl is aware that she is a carrier of Thalassemia, she could avoid marrying a carrier of the same disease”.

Professor Tanya Das, an expert in Molecular Medicine and Dean of Bose Institute said, “It would be better if the Kalyani University takes up this unique concept with the state government so that students across the state are benefitted”.

The University authorities meanwhile have decided to organize awareness campaigning in rural areas on the issue. “We would also soon launch awareness about gene card through street plays using our NSS units”, Vice-Chancellor said.