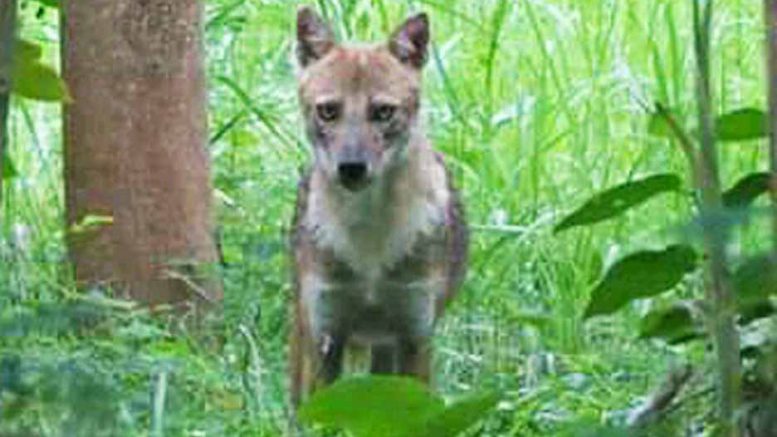 The jackal that attacked the villagers

Hogolberia, Dec. 10: Panic gripped local residents in Harekrishnapur village in Nadia’s Hogolberia after a jackal had attacked at least seven persons, injuring an elderly woman critically, in two separate incidents that occurred during the early hours of Monday morning.

While five persons were released after primary treatment, two others were admitted to hospital, including Gurubhabini Mandal (70), who suffered critical injuries with her left eye, was damaged in the attack.  The other one, Sadhan Mandal, lost two of fingers of his right palm. The duo was admitted to District hospital in Krishnagar. But, Gurubhabini was shifted to NRS Hospital in Calcutta and later to SSKM hospital during the evening. Doctors in Krishnagar said, “Condition of the elderly woman is very critical. She needs better care. She was also advised a restorative plastic surgery for her face after her condition becomes stable”.

The panicked villagers meanwhile turned violent and killed a jackal on a prowl in the village beating it with bamboo poles and sharp weapon after combing nearby fields and bushes in the afternoon.

However, it could not be immediately ascertained whether the jackal killed by the villagers was the same that attacked the villagers.

The Forest officials recovered the body of the jackal and sent for post mortem to local veterinary hospital. The animal identified as a common Asiatic Jackal.

Asiatic jackals (also known as golden jackals) are widely distributed in different parts of the country and live in a wide variety of habitats. They belong to Schedule III of the Indian Wildlife Protection Act (1972)

Forest Department’s Debnathpur Range officer Anukul Das said, “It appears to be very unusual behavior of the jackal. So we will examine if the animal was suffering from any disease like rabies or other problems”.

“It was wee hours in the morning with poor visibility. The jackal attacked us before we could realize anything. Sadhan Mandal who tried to pull the jackal out of the cowshed lost two fingers as the animal bitten up her palm until we hit it with a bamboo. My son and two other neighbors were injured in the attack”, Said Santosh Mandal, whose cattle were attacked first. The jackal later attacked another cowshed and grossly injured four cows.

Later at about 8am, the jackal again attacked farm labourer when they were plucking broad bins in Colony Para area. Gurubhabini Mandal became victim here as the jackal repeatedly bitten her face, hands, chest, damaged left eye. Other farmers were also attacked when they tried to rescue her. They, however, managed to rescue her and took to Karimpur rural hospital.

Gurubhabini’s grandson Apurba said, “The jackal would kill her unless some farmers risked their life to rescue her. She went to pluck broad beans to contribute it to a religious programme. Her condition is very critical now”.

Apurba alleged that the jackal was prowling in the area since last week and had attacked cattle. However, despite informing, the forest officials did nothing.

An officer in state wild life department said, “Some Asiatic jackals sometimes behave like a wolf. But, that is quite unusual. It behaves so generally due to any suffering from disease or physical problem”

Range officer Anukul Das said, “This seems to be rare instance of jackal attacking man.” He, The Jackal beaten to death

however, ruled out receiving any information about attack by jackal earlier.  “In several areas in Hogolberia close to Mathabhanga river jackals are found. Mainly they survive on fishes, crabs. But, it never attacked man or entered human habitation here. None has infirm us so. However, it turns violent if suffer from rabies”, Das added.

The forest department meanwhile decided to launch awareness programne in the area. “It is unfortunate that the villagers killed the jackal. They became aggrieved, but at the same time the life of the animal was needed to be saved”, an officer of Forest department’s Nadia-Murshidabad Division said.