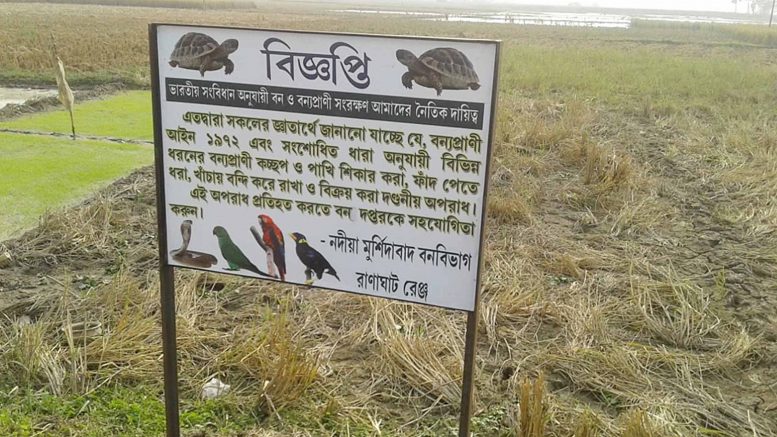 A board put up for public awareness in Chakdah

Krishnanagar, Dec. 10: Responding to repeated appeals made by nature lovers and different organizations to save birds being trapped in nets covering the water bodies and paddy fields, the state forest department has off late flung into action launching an awareness drive since last week putting boards at vulnerable locations across the district cautioning that poaching or trapping of birds could land one in jail.

The initiative of putting boards making people aware has began from Ranaghat sub division, which would be implemented across  the district gradually, an officer of Nadia-Murshidabad Division said. A kingfisher trapped in a net in Santipur

The forest officials with the help of police and local people have also removed nets from many areas, particularly from over many ponds, lakes as well as paddy field cautioned many fishermen and farmers in categorical term that a recurrence of such practice would invite legal prosecution against them and could also land them in jail.

Krishna Sikdar, Ranaghat Range officer, said, “Killing birds are punishable offence under Wild Life Act 1972. We have started putting boards to convey the message. At the same time we are organizing programmes to create awareness about nature and to sensitize people about protection of birds”

The Forest department has also urged people of cooperation and to help them to save the birds, while launching awareness among fishermen and farmers who often cover ponds and paddy field to protect their fishes and yields from birds.

The nature lovers have welcomed the initiative of the forest department.  Subhendu Byne, Palash Roy of Chakdah, who recently chased some poachers forcing them to leave the bank of Marali bil, a canal of Hooghly, said, “It is good that the forest department has come up to save the birds. But, the initiative should be widely implemented across the district as still in several areas such trapping of birds being continued unabated”.

“We are afraid that a huge number of migratory birds which have started arriving in this winter at several lakes and water bodies in the district are not fell trapped in the nets due to any delay on the part of Forest department”, said Bibartan Bhattacharjee, of Chakdah Biggyan o Sanskritik Sangha.

NfN had earlier reported that water bodies being turned into graveyards of birds as large numbers of birds  killed being trapped in nets used by fishermen covering ponds to protect fishes.  Later it was found that in many paddy field too similar nets were laid by farmers. The poachers in many places mainly close to isolated river banks used the idea to trap birds and catch live for sale in markets.

During the past few months mainly over hundred fish eating birds were killed as they are being trapped and killed being entangled in nets laid over ponds and lakes by fishermen in their effort to protect fish in several areas of district. In many areas farmers also used net to trap birds to protect paddy.

Due to such trapping, birds like common kingfisher, black cormorants, little egrets, purple herons, wild goose, common myna, scaly breasted munia which spoil fish and paddies were trapped and killed. Only exception is Fataipur in Tehatta where fishermen round the clock keeping vigil to protect migratory birds those arrived at Dhamos bill.

But, as the nature lovers raised voice in protest of trapping, police in many places removed nets. The forest department had also launched awareness. But, nature care activists alleged that in several places still birds are being trapped and killed regularly.

On Sunday in Santipur, a huge net was seen lay over a canal despite a local organisation appealed police and forest department to remove it. Several birds were seen hanging dead from the net.

An officer of Divisional Forest office in Krishnanagar said, “We used to organize awareness meeting to protect birds. We feel awareness is more needed than legal action. So our endeavor is to sensitize people. Nevertheless, legal action is the ultimate option which we would definitely take for any violation.  We have cautioned many fishermen and farmers that a recurrence of trapping or killing bird will be strongly dealt with. Meanwhile we will put more such boards and hoarding in several other areas mainly close to water bodies like lake, ponds where birds visit in large numbers”.