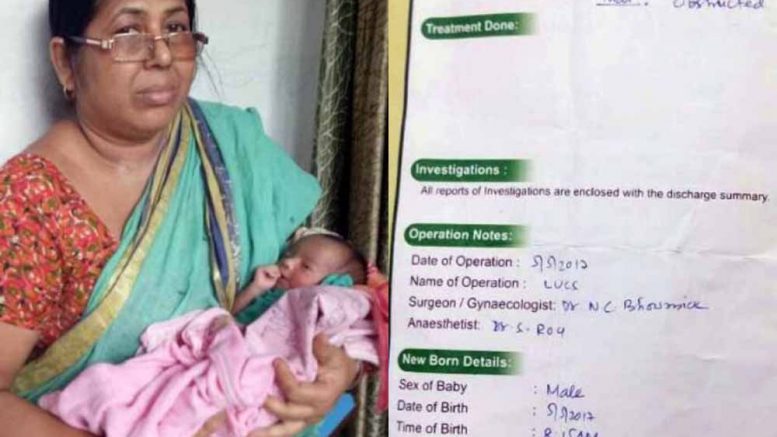 The female newborn and the original discharge certificate of Moushumi Ghosh

Kalyani, May 10: A young woman from North 24Pargana’s Naihati, who delivered a male child on May 5 at Kalyani based Jaymala hospital, has accused the  hospital authority of swapping her male child with a female baby apparently born on the same day at the hospital.

Even though the medical records and advice of the doctors clearly mention newborn’s sex as ‘male’, the Jaymala Hospital authority allegedly forged the original records and to reiterate that the woman given birth of a female child and also forced her to leave the hospital with threat of dire consequence if she tried to make it an issue.

Moushumi Ghosh, a resident of Madarpur in Naihati today lodged a complaint at Kalyani police station against the hospital authority prompting police to start an investigation into the matter.

A senior police officer said: “A case has been started under section 363 (kidnapping) of the Indian penal code on the basis of the complaint of the woman. We are also examining if the hospital has linked to any child selling racket”.

Hospital authority refuted the allegation saying that sex of the child was erroneously written as male, which was later rectified. “The hospital is ready to face any inquiry and to cooperate for a DNA test to ascertain parents of the child”, a spokesperson said.

According to hospital records, Moushumi admitted to the Jaymala Memorial hospital on May 5 morning. At about 8.15 she delivered a male child through cesarean section under gynecologist NC Bhaumik. The male child was also shown to the Moushumi and her husband Partha Ghosh, a businessman. But, barely after an hour when Moushumi was transferred to the bed, she was given a newborn female child.

Mourshimi’s husband Partha said: “In next two days we continued to request them to return our male child. But, they ignored our please and discharged my wife on May 8″.

Mainak Mahanta, a spokesperson of the Jaymala Hospital said: “The allegations are baseless. We have done nothing illegal. We acknowledged the mistake and also given written assurance to the couple that if they have any doubt we would help them to conduct a DNA test. The confusion is only due to a human error on our part while making manual entry of the sex of the newborn”.