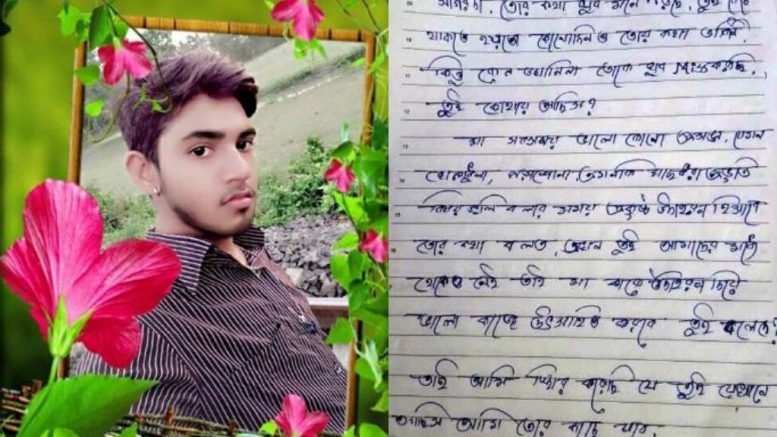 Soumitra Dhali and his suicide note Haringhata, May 9: Seven days after IISER-Kolkata student Sagar Mandal allegedly committed suicide, a boy from his native village Fetehpur-Saupara in Nadia’s Haringhata ended his life being failed to bear the shock of his sudden demise whom the boy considered as his “role model”.

Soumitra Dhali, 17, a student of class twelve Arts at Fatehpur high school, who ended his life by consuming pesticides, has left a suicide note in which he clearly stated that he was “missing” Sagar, who set an “example” as a ‘ideal’ before him.

Soumitra, a gifted clay model artisan, was a cousin of Sagar by relationship.

On May 1 Sagar Mandal, a second year BS-MS student of Indian Institute of Science Education and Research – Kolkata (IISER-K) had allegedly committed suicide. The death, however, raised suspicion and police later started a murder case accusing three classmates on the basis of a complaint lodged by Sagar’s father Susanta.

Sagar’s death was a major blow to Soumitra, who was a childhood friend and his ideal too.

In his last words Soumitra, who secured an average of 60% marks in his recently held class 11 final examination, written:

In another page of his three page suicide note written by blue ink on a old diary, Soumitra has written:

Family sources said, Soumitra left home during the wee hours of Monday morning when his parents and ten year old sister Surabhi were sleeping. He went to a nearby paddy field where he consumed pesticides.

Later unable to bear the burn and pain caused by the poisonous chemical, Soumitra returned home. He was immediately taken to JNM Hospital in Kalyani where he succumbed around 17-hours later on Monday night.

Police has confiscated the suicide notes of the boy and started a case of unnatural death. “We have found a suicide note appears to be written by the boy. Nevertheless, all angles being looked into. We are waiting for the post mortem report”, said additional SP Swati Bhangalia.

The fresh death of a promising boy, meanwhile, once again utterly shocked the villagers in Fetehpur, who have also raised their fingers on the IISER-K authorities for both the deaths.

Sagar’s sister Rekha today said: “Today I lost another brother. If the IISER officials were little careful in handling the students, both the death could be avoided. The suicide notes indicate that Soumitra also did not convince with Sagar’s suicide theory like us”.

Soumitra’s father Tarak said: “My dream has been shattered today. Soumitra was depressed since Sagar died. I talked to him, tried to be jovial. But he did not respond. I never thought he could take such a step”.

Chandidas Mandal, a local youth who used to provide private tuition to Soumitra said: “In a village like Fetehpur, where most students are first generation learners, Sagar was a role model. I also feel proud that I also once given him tuition like Soumitra. I also used to cite example of Sagar to my students. This made an impression on the psyche of sincere students like Soumitra. He was a good student with humble nature, but quite emotional which costs the life”.

Sudin Bhattacharjee, head master of Fetehpur high school said: “I am shocked and afraid too witnessing this trend. Parents and teachers should be careful to understand the mind of the students otherwise such death would increase”.

The school has decided to conduct counseling sessions for students soon.