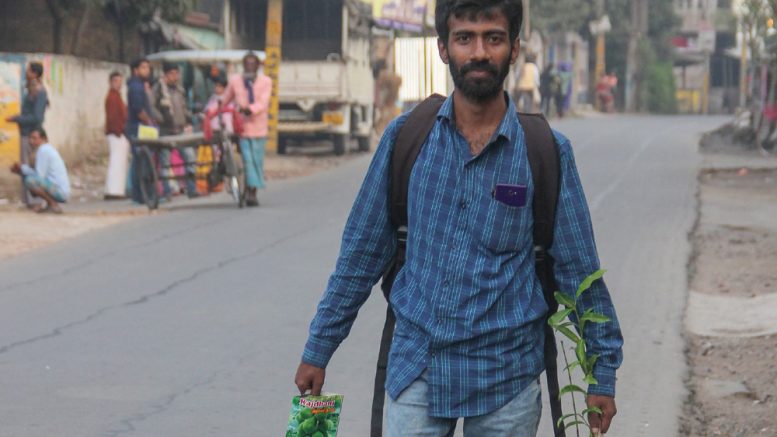 Kalyani: A final year MBBS students of Kalyani College of Medicine today celebrated the New Year’s Day by walking 48km from Kalyani to Santipur distributing seeds of plants among people and requesting them to plant trees to save birds and the environment.

Humbly avoiding an offer by his classmates to join a picnic, Rahul Deb Biswas (23), a resident of Gaighata in North 24Pargana, today during his 7 hours long walk conveyed the message among people that lives of different species of birds are at stake due to felling of trees even in rural areas for different reasons and they need to be protected by providing shelter and food. Rahul speaking against felling of tree in Phulia

The medical student, who is son of a physician, began his walk from college hostel at about 10 in the morning.

He purchased 5kg papaya and gourd seeds on the way from shop in Kalyani which he distributed among the people at different breaks along the way which includes a large stretch of NH34. Most of the breaks were taken at the tea stalls where Rahul given seeds to the people who were found taking tea in ‘khullar’ (earthen cup) and in glass.

The journey concluded near Santipur police station where local environmentalists, knowing about his endeavor welcomed him.

“I just appealed people to plant trees so that birds can get shelter, make nests and get their foods from its yields. A crisis for survival has been created due to felling of trees and for many other factors. Many species of birds are now near extinction. We can do this simple thing to save their lives. Without bird the nature’s beauty would remain incomplete. At the same time, if trees are planted the environment would remain conducive for our living. I therefore gave people gourd seed so that they plant it”, said Rahul.

“I also given people papaya seeds so that they plant it along the road. It will help birds to survive. They like papaya very much”, he said.

“My aim was to create awareness among people about the need of trees and plants. I told them to plant more tree so that our environment is saved and birds survive. Around 15-billions of trees are felled every year across the globe, whereas only about 5-billions are planted to compensate. The difference is huge and increasing every year making the globe difficult to leave. So we need awareness”, Rahul added further.

Rahul said: “Today’s walk was not a planned endeavor. It was suddenly decided. Today I avoided to join the picnic and offered my friends to celebrate in different way. I proposed a walk for fun and for nature. But, when they refused, I decided to do it own. I just told some of my friends in Santipur about my plan. They were surprised. They later informed other nature lovers in Santipur and Ranahat who also joined me on the way. Otherwise, I would do it silently”, said Rahul.

“I just tried to tell my friends that there are many ways to celebrate an event in life. I requested them to think in different ways. Today I told the same thing to the people at different breaks during my journey” – Rahul Deb Biswas

A nature care activist in Ranaghat said: “It is a great gesture by Rahul. If other youths would think like him, birds and nature would get respite and survive”.